In an interview with Outlook, Medha Patkar shares why she’s backed the farmers’ protest, her hopes from the movement and the road ahead. 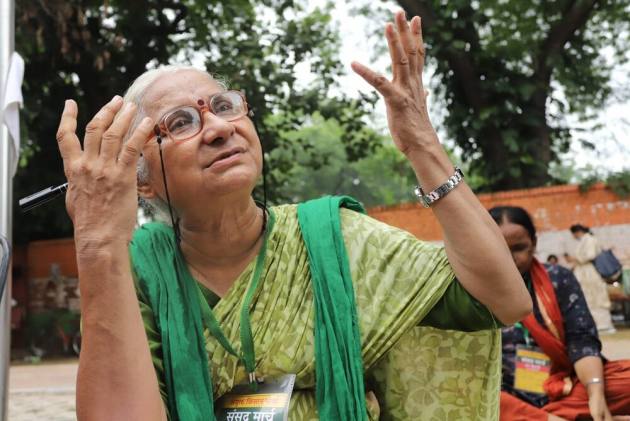 A wide range of debates, from farm laws and essential commodities to food security and gender equality, dominated the day. Amidst loud slogans, one could see the prominent 66-year-old social activist and the face of Narmada Bachao Andolan, Medha Patkar. There she was in a leafy-green saree, full rimmed glasses with strings hanging on the side, smiling gracefully at young girls taking part in the protest. She sat on the floor, deeply immersed in discussions with many women farmers who sat beside her while the langar was being served.

Medha Tai, as she is popularly known, talks with Outlook on why she has been a staunch supporter of farmers, her hopes from the movement and the road ahead. Excerpts:

Q) Why are farmers against the farm laws?

The three farm laws are not only anti-farmer but also pro-corporate. They ensure that giant corporates earn maximum profit from the farming sector even if it comes at the cost of the livelihood and wellbeing of the farmers. The entire system of Agriculture Produce Market Committees is set to be destroyed through the nexus of mandi owners and corporates, the prices of agricultural produce can be manipulated much below any declared MSP.

The new amendments have removed the food items from the essential commodities category which has been ensured to the people since 1955 through the Essential Commodities Act. This amendment will permit the hoarding of the grains.

Also, the law calls for a shift from the Public Distribution System (PDS) to Direct Benefit Transfer (DBT) system where the money will directly be transferred to the bank accounts of the women in the family. The women farmers have been categorically asserting that the money transferred to the bank will ultimately go to the liquor shops and not to the ration supply for the family.

The women farmers’ parliament was an exemplary move, and we are hopeful that their voices must have reached the parliamentarians, not only the ruling party but also the opposition.

Our question was, ‘When we are told that Modi ji is at a phone call’s distance, why aren’t we given a phone number?’

Women are fighting for their right to be recognized as farmers when they contribute to two-third of the labour in the agriculture sector. Also, they demanded the government to take cognizance of farmer suicides.

Q) How hopeful are you that this movement will have the desired effect?

We have to be optimistic while the situation is worsening and there is an assault not only on the farmers but all those who live by working on the farms. I have faith in peoples’ movements. History tells us, whenever the State has initiated a war with its own people, such progressive movements have painted a brighter picture.

Q) What do you see as the biggest threat to the agrarian economy?

Neo-capitalism and giant corporates, both Indian and global, stand as the biggest threat to the agrarian economy. With the completion of 30 years of LPG (Liberalization- Privatization- Globalization) reforms, the entire agrarian economy has been hijacked by corporates.

For instance, the Bill Gates Foundation owns 2,42,000 acres of land in the US. It is the one responsible for killing self-reliance and sustainability in Africa’s agricultural sector. Despite that, it has been invited to India by our Agriculture ministry.

We demand that the agrarian economy be self-reliant, thriving on the synergy between the cooperatives, rather than bowing to the corporates.

Q) Do you think the movement can change the socio-political landscape of India given the ideological differences within farmer groups?

Whenever a national movement takes place, there is a challenge of bringing together various sections towards a common vision and a common strategy. Today the farmers, Dalits, Adivasis are facing many challenges which are compelling all of them to raise their voices. Presently, 550 organizations of labourers, farmers, adivasis, forest dwellers, have joined hands in the movement and formed the large alliance of Sankyukt Kisan Morcha.

The farmers’ movement has gone beyond the casteist and communal differences. The time has come that it also embraces gender justice. There is a need for women to be at the forefront and grab leadership roles in the movement. We need a progressive outlook which thrives on socio-economic and political equity and justice.

Yes, there are ideological differences within the farmer community, various organizations from left to centre of the political spectrum have joined hands. But there is no alliance with any organization advocating communal, casteist or patriarchal beliefs. It is clear that a broader secular force is asserting itself through this movement. The movement also looks forward to mitigating the differences within the agricultural sector - between land holders and labourers, Hindus and Muslims farmers etc. These conscious efforts are holding everyone together.

Today, when survival is at stake, when the claws of fascism, neo-capitalism and neo-colonization are spreading all across, there is a need to go beyond our ideological differences. And who knows, someday a new ideology may emerge out of such movements. Let me share some examples.

Within the movement, we formed a Mahila Suraksha committee to ensure the security of women protestors. Also, to strengthen women participation in the movement and enlighten it with a feminist perspective.

In 2013, there were riots between the Jats and Muslims in Muzaffarnagar, but today if you look at the Ghazipur border -all of them are together in this struggle for dignity. The slogan, ‘Hindu, Muslim, Sikh, Isai aapas mein hai behen bhai’ has actually come alive. A new political forum like Jan Sansad has come into existence which challenges the valuelessness and undemocratic practices in electoral politics.

The movement with this unprecedented strength can be compared to the freedom movement that could drive away the British imperial forces. We just need to keep that flame alive. As long as the flame lives, even in the heart of a few, the movement will continue to thrive. I am hopeful.