Fight Not With Any Party But Centre's Policy: Rakesh Tikait On Farmers' Protest

Takait also stressed that the discussions between representatives of farmers and the government should be televised for greater transparency and wider reach among people. 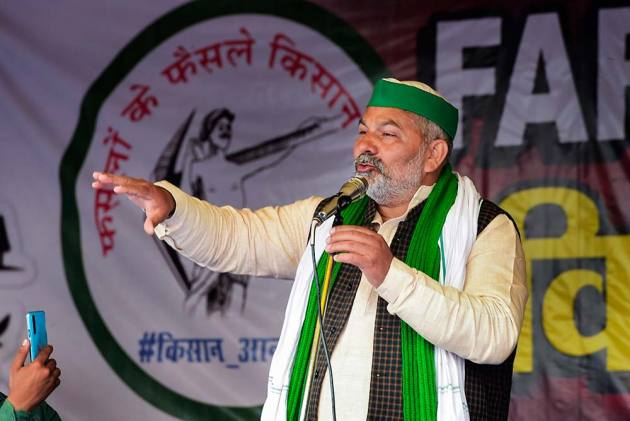 Ahead of the tenth round of talks between the centre and protesting farmers, Bharatiya Kisan Union (BKU) chief Rakesh Tikait said on Monday that the farmers' fight is against the policy of the government and not with any particular political party.

He warned that the agitation could prolong further if the government refuses to address grievances.

"Our fight is not with any party but the government. Here (in the protest) also we have people who support the BJP and will vote for them in the next election. But any party or ideology is not our concern. We are against the policy of the government," he said, addressing hundreds, including women and youth, at the Dalit Prerna Sthal.

Tikait, who has participated in the multiple rounds of dialogues between farmers' unions and the government representatives in Delhi over the past 54 days, was in Noida where he addressed protestors belonging to the BKU's faction Lok Shakti.

He said Prime Minister Narendra Modi should also reach out to the farmers, but only after the government has accepted their demands on the three new farm laws and legalisation of the minimum support price (MSP) on crops.

"The Prime Minister should come amidst farmers and the government the day our demands are met and the issue is resolved. We will thank him and treat him with respect that day. We also don't want him to come between us until then," Tikait said.

He also stressed that the discussions between representatives of farmers and the government should be televised for greater transparency and wider reach among people.

Tikait, who is leading his BKU supporters at the Ghazipur border in Ghaziabad, had reached the Dalit Prerna Sthal in Noida around 2 pm along with his union's Uttar Pradesh unit spokesperson Pawan Khatana and other leaders.

They met BKU (Lok Shakti) chief Sheoraj Singh and his supporters, who are camping at the Dalit Prerna Sthal since December 2, and participated in a human chain at the spot to symbolise the unity among various factions of protestors, BKU (Lok Shakti) spokesperson Shailesh Kumar Giri said.

Exhorting the protestors to keep their spirits high, Tikait said, "They (the government) can accept our demands today, tomorrow or in six months or by 2024 because the farmers are not going back until then."

The influential peasants'' leader also called on the protestors to carry out the agitation responsibly and peacefully.

"We must respect the land wherever we are whether our farms or a protest site. The protest should be peaceful and no property should be damaged," he said.

Thousands of protesting farmers are currently staying put at Delhi's borders with Haryana and Uttar Pradesh demanding rollback of the Farmers' Produce Trade and Commerce (Promotion and Facilitation) Act, 2020, the Farmers (Empowerment and Protection) Agreement on Price Assurance and Farm Services Act, 2020 and the Essential Commodities (Amendment) Act, 2020.