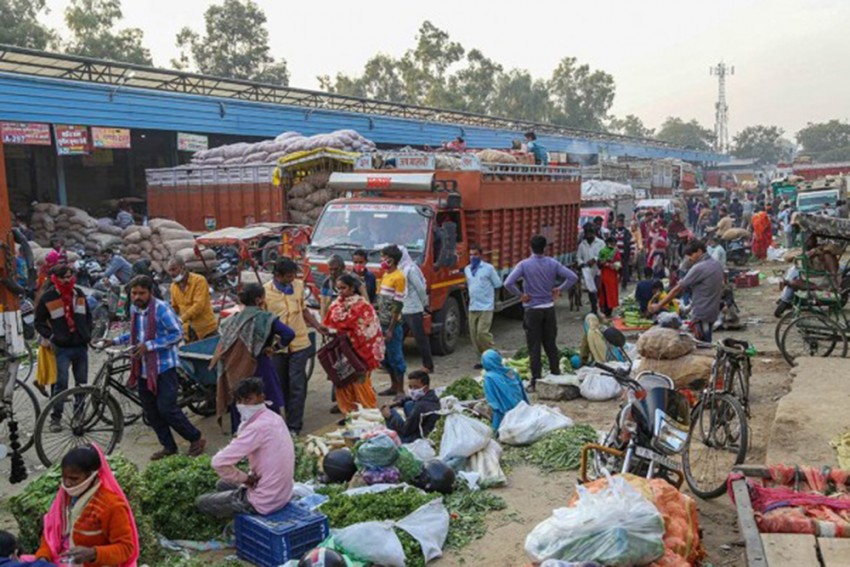 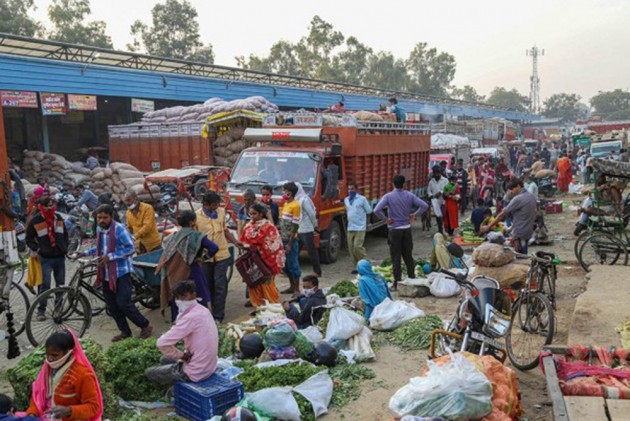 The supply of vegetables and fruits to the city from other states has been impacted and it has been halved at Azadpur Mandi, one of Delhi's largest wholesale markets, owing to the protest by farmers at the Singhu and Tikri border points of the national capital for the last five days.

Vendors in other parts of Delhi said due to curtailed supply, the wholesale rates of seasonal vegetables have gone up by Rs 50- Rs 100.

They said the roadblock at Singhu and Tikri border has impacted supply of vegetables and fruits from Punjab, Haryana, Himachal Pradesh and Jammu and Kashmir.

The arrival of vegetables and fruits to Delhi's largest wholesale market at Azadpur has been reduced by half due to the closed borders, said Adil Khan, chairman Agricultural Produce Marketing Committee at Azadpur.

“During normal days, around 2,500 trucks of vegetables and fruits used to arrive at Azadpur Mandi from other states. The number has come down to around 1,000 trucks now and if the borders remained closed for a few more days, the situation will worsen," Khan said.

He, however, said the rates have not registered any significant rise so far because local produce and stocks are being sold.

Some other vendors said the wholesale rates of seasonal vegetables have already gone up by Rs 50-Rs 100 due to the short supply.

They said due to obstructions at the border, the trucks are finding it difficult to reach Delhi and those somehow managing to do so are getting delayed by several hours.

“The supply and rates will have further impact if the borders are not opened and traffic is brought back to normal,” they said.

Normally 40-45 trucks of peas from Punjab's Amritsar-Hosiarpur belt would arrive on a given day in winters but it has reduced to 15-20 trucks now, he said. "The rates have gone up due to reduced supply and hike in transport charges that have increased by around Rs 10,000 per truck," he said.

The trucks from Punjab carrying fruits and vegetables that would normally take around 9-10 hours for a trip to Delhi, now takes 12-14 hours due to closure of Singhu border, said another wholesaler.

The reduced supply has also pushed retail rates in the markets of the city. The rates of potatoes, tomatoes and onion that were already high, have relatively been less affected, said the wholesalers.

“The major supply of potatoes and onions to Delhi are from states like Maharashtra, Karnataka and MP and the routes to these states are not affected by the farmers' stir.

"However, supply of vegetables and fruits from Punjab, Haryana, Himachal Pradesh and Jammu and Kashmir has been affected," said Hakim Rahman, a wholesaler at Okhla Mandi.

Some wholesalers said the supply was badly impacted for two days of the farmers' protest but now it has been restored as the trucks were using alternate entry points and routes to enter the city from other states.

"The supply had reduced initially for two-three days as the farmers blocked the Singhu and Tikri borders. But, now, the trucks are using other roads and avoiding highways although it has resulted in longer hours of travel and increased transportation charges," said a vegetable commission agent Srikant Mishra at Azadpur Mandi. He said the supply of new crop of potatoes has also been hit.

A fruit wholesaler at Azadpur Mandi, R.K. Bhatia, said the supply of fruits like apple and Kinnow was hit but rates were more or less the same. Apples in Kashmir were not good this season, so rates were already high and demand was less, he said.

Delhi BJP spokesperson Pravin Kapoor claimed that availability of vegetables and fruits is getting short in Delhi and requested Chief Minister Arvind Kejriwal to pay attention towards the issue.