Sachin Tendulkar, Other Indian Celebrities Draw Flak For Attacking Rihanna Over Her Support To Farmers' Protest 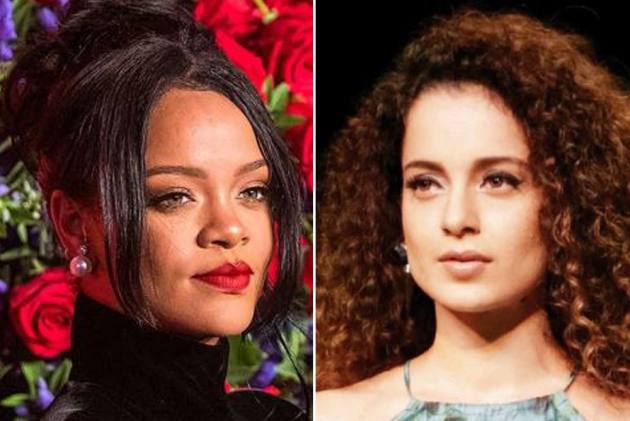 Even the simplest of questions can wake up an entire nation. Seemingly, that's what has happened in India after Rihanna took to Twitter, asking "why aren’t we talking about this". Barbadian pop star's tweet served as a rude alarm to the Indian celebrities, the high and mighty in the world's largest democracy who were accused of taking a deep slumber while farmers' protest against new farm laws.

For the third day, Rihanna's tweet in support of protesting farmers continued to dominate the social media platforms with many Indian celebrities hitting out at the pop star. But there are those who have supported Rihanna and others for speaking up and asking the question.

why aren’t we talking about this?! #FarmersProtest https://t.co/obmIlXhK9S

Prominent among them is Congress leader Shashi Tharoor, who on Wednesday said the damage done to India's global image by the government's "obduracy and undemocratic behaviour" can't be remedied by a cricketer's tweets.

For GoI to get Indian celebrities to react to Western ones is embarrassing. The damage done to India's global image by GoI's obduracy &undemocratic behaviour can't be remedied by a cricketer's tweets. Withdraw the farm laws &discuss solutions w/farmers &you'll get #IndiaTogether.

Indian continued to flock to social media as farmers found an unlikely ally in global celebrities and activists. Here are some reactions:

My Dear @sachin_rt I loved you more than Dhoni, i read your book, watched your movie and your matches infinite number of times, But today you have lost a fan and thousands from Punjab and Haryana, Tommorow I will Burn your book, I know I am NoOne for you but it means a lot to me

So farmers sitting in bitter cold for two months are not Indians?

Did you speak for them?

How many days Farmers are suffering? Do you know ?

This is not interference in another country's matter but Rihanna's tweet is breaking the country's national security..ðÂÂÂÂÂ¤­ðÂÂÂÂÂÂÂÂÂÂÂÂÂÂÂ hippocrisy of bootlickers!! pic.twitter.com/6xNYN1EC5e

Another senior Congress leader P Chidambaram said it is good that Rihanna and Greta Thunberg can wake up the Ministry of External Affairs (MEA).

"Come on MEA, when will you realize that people concerned with issues of human rights and livelihoods do not recognize national boundaries? Why did MEA comment on the military coup in Myanmar? Why is it 'deeply concerning' to the MEA?" he said in a series of tweets.

It is good that Rihanna and Greta Thunberg can wake up the MEA.

Come on MEA, when will you realize that people concerned with issues of human rights and livelihoods do not recognize national boundaries?

Why does MEA regularly comment on issues that are "internal" to Sri Lanka and Nepal, the former Union minister asked.

"Why did the PM of India comment on the assault on the Capitol building in Washington by the Trump storm troopers? It is sad that someone erudite and worldly wise like Mr S Jaishankar should allow such puerile reactions by the MEA," Chidambaram said.

Earlier, former Congress chief Rahul Gandhi, at a press conference, refused to comment on the tweets by the international celebrities extending support to the farmers' protest, saying "this is our internal matter".

Adding to the voices of Rihanna and Thunberg were American actor Amanda Cerni, US Vice President Kamala Harris' niece Meena Harris, 'Serendipity' star John Cusack, who retweeted a post by Ugandan climate activist Vanessa Nakate reading, "Let us talk about what is happening in India right now #FarmersProtest", and former adult star Mia Khalifa who asked, "What in the human rights violations is going on?! They cut the internet around New Delhi?! #FarmersProtest."

In a statement, the Ministry of External Affairs earlier slammed the remarks made by Rihanna and other celebrities and activists on farmer protests, saying the facts on the issue must be ascertained before rushing to comment on it, and asserted that the "temptation" of sensationalist social media hashtags and views is "neither accurate nor responsible".

Meanwhile, India cricket captain Virat Kohli on Thursday said the ongoing farmers' protest against new agriculture laws has come up for discussion in his team meeting where everyone has "expressed what they had to".

Kohli, speaking online to the media ahead of the first Test against England here, did not divulge the details of the "brief" conversation on the matter.

"Like any issue present in the country, we do talk about it and everyone had expressed what they had to," Kohli said when asked about the agitation that has been going on for over two months.

"That's about it. We briefly spoke about it in the team meeting and we carried on discussing the team and game plans," he added.