Farmers' Protest: The farmers gathered in huge numbers a day after the BKU leader Rakesh Tikait broke down at Ghazipur. 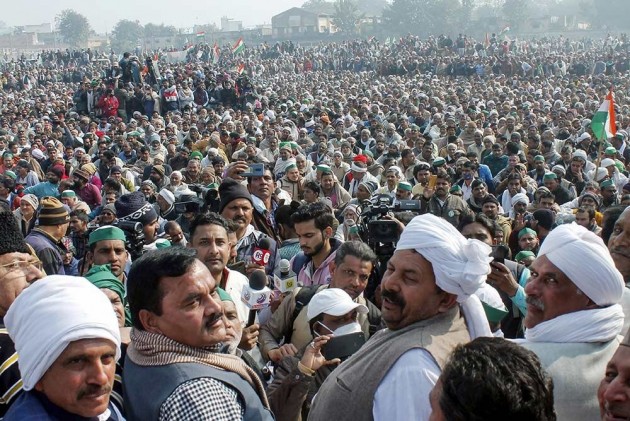 Supporting the Bharatiya Kisan Union-led protest against the agriculture laws in Ghazipur on the Delhi-Uttar Pradesh border, thousands of farmers have gathered in Muzaffarnagar to attend the mahapanchayat.

It seems like every person even remotely related to agriculture and farming has reached Muzaffarnagar. The farmers gathered in huge numbers a day after the BKU leader Rakesh Tikait broke down at Ghazipur and fear took over that the farmers who had been camping there for two months would be forcibly removed by the local administration.

Disrupting the traffic movement, tons of tractors with the tricolour and flags of farm unions were parked along the city road. The GIC ground near Mahaveer Chowk was packed, a sea of people congregating to back the protesters at UP Gate in Ghazipur.

As Muzaffarnagar became the meeting point for farmers from across the region, Rashtriya Lok Dal (RLD) chief Ajit Singh also announced support for the BKU and his son, party leader Jayant Chaudhary, participated in the mahapanchayat too.

"It is a matter of life and death for farmers, but do not worry. All have to stay together, united in this -- this is Chaudhary saahab's  (Ajit Singh's) message," the RLD vice president said in a tweet in Hindi.

Members of the group have been protesting at Ghazipur for more than two months to demand a rollback of the contentious farm laws brought by the Centre in September last year.

The RLD, which was virtually wiped out in the last Uttar Pradesh Assembly polls, was founded by Singh, son of the former prime minister and farmer leader Chaudhary Charan Singh.

The  ahapanchayat was called by BKU national president Naresh Tikait over the developments in Ghazipur.