Farmers’ Protests: Unions To Campaign Against BJP In Poll-Bound States 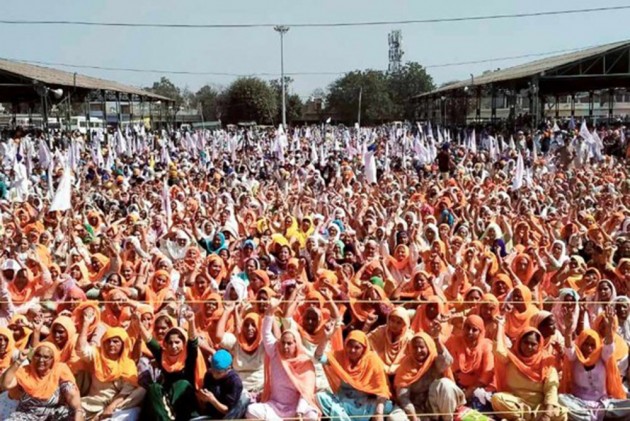 Samyukta Kisan Morcha (SKM), an umbrella organisation of numerous farmer unions, announced on Tuesday that it will campaign against the BJP in all poll-bound states.

Leaders of the organisation have also said that they will block the KMP (Western Peripheral) Expressway on March 6 to protest the Centre’s recent agriculture legislations.

The developments come just a day after Prime Minister Narendra Modi emphasised on the need for an increased participation of private players in the farm sector.

Thousands of farmers from Punjab, Haryana and Uttar Pradesh having been camping outside the national capital seeking a complete repeal of the new laws. They believe that the farm legislations favour the corporates.

To commemorate 100-days of the farmers’ agitation, protesters will block the KMP expressway on March 6 from 11 am, SKM leader Yogendra Yadav said.

He further said SKM leaders will hold a public meeting in Kolkata on March 12 to appeal to the farmers of poll-bound states to “punish” the BJP.

SKM leader Balbir Singh Rajewal said that SKM teams will visit poll-bound states, including West Bengal and Kerala, to appeal to farmers to defeat the BJP.

"We will not seek votes for any party. We will appeal to them to vote for those candidates who can defeat the BJP which has failed to address farmers' issues," Rajewal said at a joint press conference of the SKM at Singhu border.

"So, the farmers have decided to hurt them through votes. We are appealing to voters in five poll-bound states to punish this party (BJP) and its allies who enacted anti-farmers laws, repressed farmers and tried to humiliate them," Yadav said.

The morcha leaders will also visit Karnataka where farmers are getting at least Rs 1000 less than MSP on various crops, Yadav said.

Farmers will also visit mandis, beginning from Gulbarga on March 5, to seek minimum support price for their produce.

On Women’s Day on March 8, women protesters will lead the protest at Delhi borders and other places across the country, Yadav said.

The SKM held a general body meeting of its constituents at the Singhu border on Monday, preparing its action plan for taking forward the movement.

The SKM has given a call to the people to install black flags at their houses and wear black armbands as a mark of support to the movement as it completes 100 days on March 6.