The umbrella body of the farmer unions, Samyukt Kisan Morcha, has decided to keep off aggressive demonstrations during the 'chakka jam'. 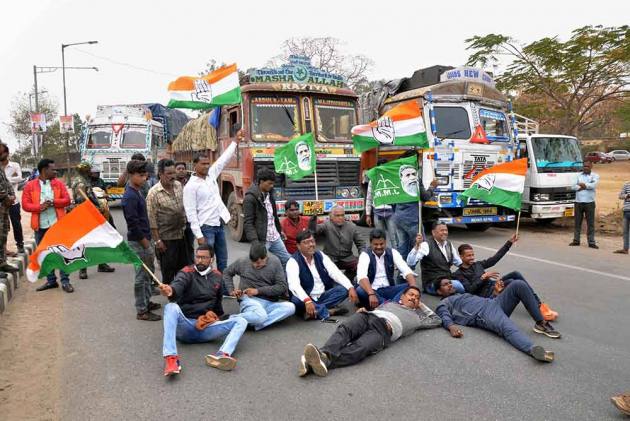 After the Republic Day violence in the national capital, farmers have now decided to keep off aggressive demonstrations and are now coming up with creative methods to demonstrate their resentment towards Centre’s new farm laws.

From planting flowers at protest sites to road blockades only outside city limits, farmer leaders are devising new methods to intensify their movement.

The umbrella body of the farmer unions, Samyukt Kisan Morcha, has decided to keep off aggressive demonstrations even as many farmers are also protesting against the internet ban in and around their agitation sites, alleged harassment by authorities, among other issues.

The Delhi Police has beefed up security and intensified its presence across Delhi and its borders. It has also made arrangements for traffic diversion, said officials, adding adequate police personnel was deployed in Punjab and Haryana.

Morcha leaders have asserted that the protesting farmers will not block roads in Delhi, Uttar Pradesh and Uttarakhand during the 'chakka jam'.  Meanwhile, Bharti Kisan Union (Ekta Ugrahan) general secretary Sukhdev Singh Kokrikalan said they are holding road blockades at 33 places in 15 districts including Sangrur, Barnala, and Bathinda in Punjab.

However, state and national highways will be blocked till the 'chakka jam' ends at 3 pm.

Leaders have also instructed protesting farmers to allow all emergency services’ vehicles to ply. They have been asked to help with ambulance, school-bus, etc. to get through traffic snarls if any due to the blockade.

In some places, provisions have been made to offer gram, peanut, jaggery, and water to travellers caught on highways during the blockade.

Protestors also intend to explain their point to the people during this period.

However, RSS-affiliate Bharatiya Kisan Sangh (BKS) is not supporting the blockade. According to its leaders, the protests have turned into political propaganda.

On its part, the Morcha has sought support from the people and asked everybody to honk their vehicles’ horns for a minute to declare the closing of Saturday’s demonstration.

Around 50 people were detained near Shaheedi Park in central Delhi on Saturday for allegedly holding a protest in support of the 'chakka jam' call given by the farmers agitating against the Centre's new agri laws, police said.

While urging the government to accept the farmers' demand, Delhi's deputy cheif minsiter Manish Sisodia on Saturday said, "There is high alert in Delhi, but one can understand the pain of farmers across the country. I have seen that farmers from Gujarat also went to Delhi to present their points (on farm laws)…The main issue is why did the BJP bring the laws to benefit select corporates by setting aside the interest of farmers? And if the BJP thinks that the laws are in the interest of farmers, and they understand them better, then why doesn't it accept the farmers' demands?” Sisodia asked.