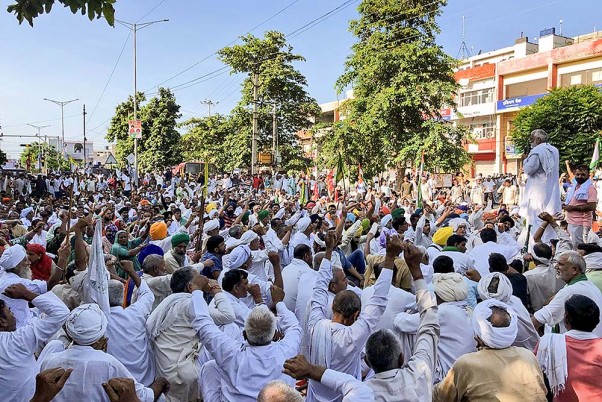 Another round of talks between district officials and farmers protesting over a police lathi-charge last month failed Wednesday and the protesters said they will continue their sit-in at the gates of the district headquarters in Karnal.

The farmers’ demands centre around the suspension of IAS officer Ayush Sinha, who was caught on tape allegedly telling policemen to “break heads” of farmers if they cross the line during their August 28 protest.

About 10 farmers were hurt that day when police used force to stop them from marching to the venue of a BJP event in Karnal.

The sit-in outside the Karnal mini-secretariat, following a mahapanchayat in the same city, began Tuesday evening after talks between district officials and farm leaders “failed”.

On Wednesday, the district administration again invited a delegation of Samyukt Kisan Morcha leaders for a meeting at 2 pm in another bid to end the standoff.

“The talks completely failed because the government is adopting an adamant attitude,” SKM leader Yogendra Yadav told reporters after the three-hour meeting.

He said the government is not even ready to suspend the IAS officer, leave alone register a case against him.

Bhartiya Kisan Union leader Rakesh Tikait said they have decided to continue with the dharna at the same site, where many spent the previous night.

The protest leaders had also claimed that  a farmer died after the August 28 violence, an allegation rejected by the administration.

SDM Sinha was transferred days after the controversy over his remarks, but the move was part of a larger bureaucratic shuffle in Haryana.