Around 50 protesters have already been booked, police officials said 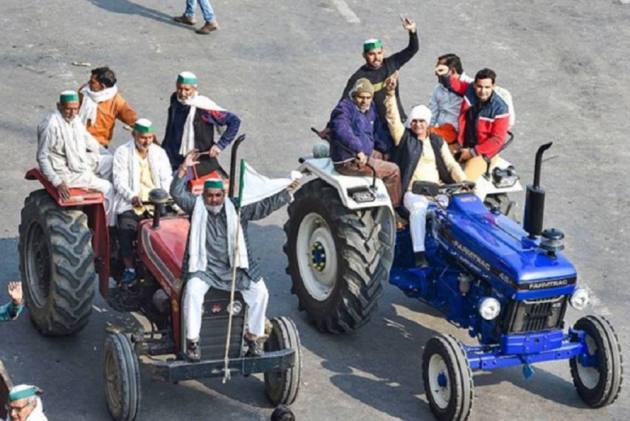 A day after the farmers' tractor parade in the national capital ended in chaos and violence, Haryana's Palwal district police on Wednesday filed an FIR against nearly 2,000 unidentified protesters. The complaints have been filed for allegedly trying to break barricades, forcibly entering Delhi and driving dangerously during the protests, among other charges, officials said.

They also stated - 'Around, 50 protesters have been booked under Section 307 (attempt to murder) of the Indian Penal Code (IPC) for driving tractors dangerously, endangering the lives of Palwal police chief Deepak Gahlawat and other police officials who were on duty'.

The case has been registered under various other sections of the IPC including those relating to obstructing a public servant in discharge of public functions, use of assault or criminal force to deter a public servant from discharge of his duty, and blocking the national highway, the police said.

The case was filed on the basis of a complaint given by a head constable, they said.

"Investigation in the case is under progress," Gahlawat said.

As part of the larger tractor parade, wielding sticks and clubs and holding the tricolour and union flags, tens of thousands of farmers atop tractors broke barriers, clashed with police, overturned vehicles and entered Delhi from various points to lay siege to the Red Fort on Republic Day on Tuesday.

The protesters also hoisted a religious flag from the ramparts of the Red Fort, a privilege reserved for India's tricolour.

The Palwal police had on Tuesday said the farmers had been given a different route for their tractor parade, but they did not stick to it, forcing the police to resort to baton charge.

Gahlawat had earlier said that just before the tractor parade, the Palwal police had held discussions with the group of farmers that had been sitting in protest there for the past several days.

"We had given them the option of using the 60-km stretch of KGP expressway and told them that they could use the route after taking a right turn from Faridabad's Sector 58.

However, they were adamant on using the other route towards Delhi, which we had disallowed," he had said.

Farmers, mostly from Punjab, Haryana and western Uttar Pradesh, have been camping at several Delhi border points, including Tikri, Singhu and Ghazipur, since November 28 last year, demanding the repeal of the Centre's three farm laws and a legal guarantee on minimum support price for their crops.