Samyukt Kisan Morcha(SKM’s) core member said: ‘Our call of tractor march to Parliament still stands. A final decision on the future course of the agitation and MSP issue will be taken in a meeting of the SKM at Singhu Border on Sunday’. 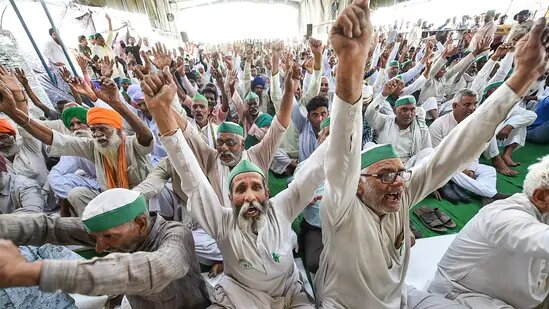 The Samyukt Kisan Morcha (SKM),an umbrella body of the agitating farmers unions will meet on Sunday to discuss on the next course of action, its core committee member Darshan Pal said.

The meeting comes after the Centre’s decision to repeal the three agri laws which is now facing pressure from agitating farmer unions and opposition parties to bring in a legislation guaranteeing Minimum Support Price, with ruling BJP MP Varun Gandhi also joining the chorus on Saturday.

Gandhi said the stir won't end till these issues are not resolved.

Farmer leaders said the protesters will stay put at border areas of Delhi until the Centre formally repeals these laws in Parliament after Prime Minister Narendra Modi's surprise announcement on Friday and indicated their stir for a statutory guarantee of MSP and withdrawal of the Electricity Amendment Bill will continue.

"Our call of tractor march to Parliament still stands. A final decision on the future course of the agitation and MSP issue will be taken in a meeting of the SKM at Singhu Border on Sunday,"Darshan Pal said.

While the opposition needled and mocked the government after it agreed to rollback the farm laws, BJP MP Varun Gandhi, who had deviated from the party line to speak out in favour of the protesters, wrote to Prime Minister Narendra Modi, urging him to accept the farmers' demand for a statutory MSP guarantee.

The MP from Pilibhit in Uttar Pradesh said if the decision to repeal farm had been taken earlier, "innocent lives would not have been lost".

"This movement will not end without the resolution of this (MSP) demand and there will be widespread anger amongst them, which will continue to emerge in one form or the other. Therefore, it is very important for the farmers to get the statutory guarantee of MSP for their crops," he wrote and also demanded that Rs 1 crore compensation be given to farmers “martyred” in the movement against the laws.

Like Varun Gandhi, BSP chief Mayawati also demanded a law to guarantee MSP and withdrawal of cases against the protesters.

"There should be a new law to ensure the minimum support price for the produce of farmers, and barring cases of serious nature, all cases registered against farmers, who are the country’s pride, should be withdrawn. This should be ensured by the Centre, and it would then be appropriate," she tweeted.

The Congress and Left parties have also demanded that a law should be enacted on the MSP guarantee while repealing the three laws from last year.

Action was also sought against Union Minister Ajay Mishra for the violence in Lakhimpur Kheri by Varun Gandhi as well as Congress leader Priyanka Gandhi, who also urged Modi not to share the stage with the minister during the conference of DGPs in Lucknow.

Violence had erupted in Lakhimpur Kheri on October 3 in which four agitating farmers were run over by a vehicle while four others, including a journalist and two BJP workers, were also killed.

The opposition continued to take target the government over the withdrawal of the farm laws.

" 'Mahabharata' and 'Ramayana' teach us that arrogance ultimately gets crushed, but the fake Hindutvawadis seemed to have forgotten this and launched an attack on truth and justice like Ravana," the Shive Sena said.

"At least in future, the Centre should shun arrogance before bringing such laws, and take the opposition parties into confidence for the welfare of the country," an editorial in party mouthpiece 'Saamana' said, adding that BJP's "defeat" in bypolls forced the Centre to take the decision.

Congress leader P Chidambaram claimed Prime Minister Modi made the announcement to repeal the farm laws without holding a Cabinet meeting and alleged that it is only under the BJP that laws are made and unmade without prior Cabinet approval.

Union minister General V K Singh, however, lamented the insistence of a section of farmers on a rollback of the reform legislation.

"I asked a farmer leader to tell me what is black (in the farm laws). You people say this is a black law. I asked them what is black barring the ink (used). They said we endorse your view but these (laws) are still black," the former Army chief told reporters in Basti, Uttar Pradesh.

"What is the cure (for this)? There is no cure,” he said expressing his exasperation.

“In farmers' organisations, there is a fight for supremacy among themselves. These people cannot think about the benefits to small farmers," he said.

The farmer leaders said the unions were discussing the developments and will participate in the SKM meeting on Sunday.

"We have decided not to leave the site till these laws are formally repealed in Parliament. Mobilisation of farmers on Delhi borders on November 26 to mark the first anniversary of the agitation will continue," farmer leader at Tikri Border and SKM member Sudesh Goyat said.

Hundreds of protesting farmers have been camping at important stretches of Delhi's borders in Singhu, Tikri and Ghazipur since November 2020, forcing people to take detours during interstate travel.

It now appears that commuters will have to wait for some time for any reprieve on this front.

On Friday, Prime Minister Narendra Modi announced the Centre will repeal the three farm laws after the nearly year-long agitation by a section of farmers, mostly from Punjab, Haryana and Uttar Pradesh.

The Supreme Court has stayed the implementation of the three laws in January. (With PTI inputs)