A 30-35% drop in overall onion production is feared as Maharashtra, Karnataka and Andhra Pradesh are experiencing production crisis. 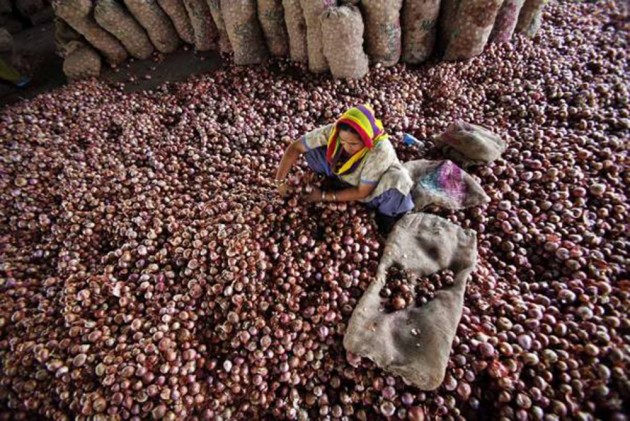 Onions are set to make consumers shed more tears this season as the government order on September 14 to ban exports and the onion growers in Maharashtra going on indefinite strike since the last three days is expected to hit supplies in many parts of the country. The adverse market sentiments may lead to further rise in price of onions, an issue with high political connotations.

The government decision to ban onion exports this year may have been led by fear of shortfall in domestic supply due to heavy rains last month and high humidity, but the suddenness of the decision has resulted in “irretrievable” damage to large stocks ready for shipment at the ports and at Bangladesh border, says Bharat Dighole, president of Maharashtra State Onion Growers Association.

Given that on June 3, the central government had announced that the cabinet had approved deregulation of onion and several other agriculture produce by removing them from the purview of the Essential Commodities Act, the exporters had gone ahead with booking orders in Bangladesh, Sri Lanka, Singapore, UAE among other countries. The sudden decision by the central government to ban exports of onion has not only hit exporters but also domestic supplies with farmers in Maharashtra beginning to stop letting any stock leave their farmyard, revealed some farmer producer companies that Outlook spoke to.

Maharashtra being one of the key onion producing states in the country, Lasalgaon in Nashik District has emerged as a export hub of onions. This year, damage to onion stocks in storage due to high humidity, heavy rains and flooding in June and July has severely hit production in Maharashtra. Farming activities also took a hit in Karnataka and Andhra Pradesh due to which a 30-35 per cent drop in overall production is expected. The damage being less in Maharashtra, exporters from other states had set up base in the primary market or export zone in Nashik to meet their orders.

“The ban order came as a surprise to exporters, who were confident of being able to meet their commitments, more so as there has so far been no disruption in supplies to secondary markets in metro cities nor has there been any steep rise in prices,” says Yogesh Thorat of MahaFPC, which has over 400 farmers as members.

Dighole points out that due to damage in crops, there was expectations that exports would help to recoup losses as exporters are paying Rs. 2000 to Rs. 2400 per quintal, whereas it is fetching farmers only Rs. 800 to Rs. 1200/ quintal in secondary markets that serve domestic traders.

However, there has been some rise in prices. As against Rs 12/kg average price a fortnight back, it is currently stabilized around Rs. 17/kg, unlike retail prices which have jumped from Rs. 60 to Rs. 80 per kg in certain markets and is expected to rise further to Rs. 100 if the current fear of shortfall takes hold. Else fresh arrivals from AP and Rajasthan should stabilize the retail price at lower levels.

Given the voters' sentiments attached to onions, farmer producer companies in Maharashtra claim that around 800 tonnes of supplies have been sent to Bihar to ensure no shortage.