Modi also said his government has been working to make development a mass movement in the same way as Mahatma Gandhi made the freedom struggle. 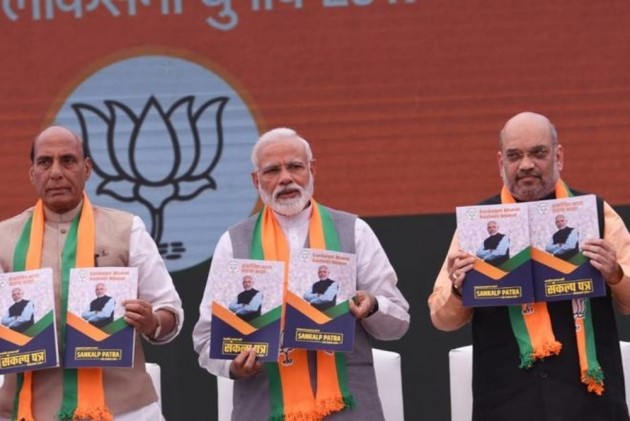 With two days to go for the first phase of the Lok Sabha elections on April 11, Bhartiya Janata Party (BJP) has launched its manifesto on Monday. Titled as "sankalp patra’, the manifesto focuses mainly on ‘National Security and ‘welfare measures.  The manifesto was designed by a 20-member committee headed by Union Minister Rajnath Singh.

BJP Manifesto Is A Mix Of Hard Nationalism And Social Welfare

As on expected lines, ‘national security’ figured mainly in the manifesto. It emphasizes that security doctrine will be guided by national security interest.  To drive home the point, it also points out the recent surgical strikes and the air Strikes carried out by India. “We will firmly continue our policy of ‘Zero Tolerance’ against terrorism and extremism and will continue to follow our policy of giving a free hand to our security forces in combating terrorism,” it said.

Apart from strengthening the Armed Forces, the manifesto also deliberates on party’s commitment to ensure self-reliance in procurement of defence equipment.  “The most modern AK-203 automatic rifles are being manufactured at Amethi under our 'Make in India in Defence' initiative. We are committed to focus on 'Make in India in Defence' to enable indigenous production of defence equipment,”

Though the BJP-led NDA government failed to pass Citizenship (Amendment) Bill in Rajya Sabha earlier this year, its manifesto firmly says that it will implement the Bill if it gets a second term in power.  The move to implement the Bill, which seeks to grant Indian citizenship to non-Muslims from Bangladesh, Pakistan and Afghanistan, faced massive opposition in Assam and other North Eastern states.

“We are committed to the enactment of the Citizenship Amendment Bill for the protection of individuals of religious minority communities from neighbouring countries escaping persecution. We will make all efforts to clarify the issues to the sections of population from the Northeastern states who have expressed apprehensions regarding the legislation. We reiterate our commitment to protect the linguistic, cultural and social identity of the people of Northeast. Hindus, Jains, Buddhists and d Sikhs escaping persecution from India’s neighbouring countries will be given citizenship in India,” it said.

Scrapping of Article 370 and Article 35A

Consistent with its earlier stand, the manifesto vows to scrap Article 370, which gives special status to Jammu and Kashmir. It also promises to annul Article 35A, which allows state's legislature to define permanent residents.

“In the last five years, we have made all necessary efforts to ensure peace in Jammu and Kashmir through decisive actions and firm policy. We are committed to overcome all obstacles that come in the way of development and provide adequate financial resources to all the regions of the state. We reiterate our position since the time of the Jan Sangh to the abrogation of Article 370,” it said.

The manifesto also reiterated its stand on scrapping Article 35A, which the party sees as an obstacle to the development of the state.

“We will take all steps to ensure a safe and peaceful environment for all residents of the state. We will make all efforts to ensure the safe return of Kashmiri Pandits and we will provide financial assistance for the resettlement of refugees from West Pakistan, Pakistan occupied Jammu and Kashmir (POJK) and Chhamb,” it said.

In order to cut down expenditure and ensure effective administration, the party in its manifesto promised to conduct simultaneous elections for Parliament, State assemblies and local bodies. “We will try to build consensus on this issue with all parties,” it said.

The building of ‘Ram Mandir’, a major poll plank of BJP since 1996, has again found place in the upcoming elections. The party said that “It will explore all possible options within the Constitutional Framework to build temple,”. Another promise is to draw up a Uniform Civil Code “drawing upon the best traditions and harmonizing them with the modern times”.

The manifesto read”Article 44 of the Constitution of India lists Uniform Civil Code as one of the Directive Principles of State Policy. BJP believes that there cannot be gender equality till such time India adopts a Uniform Civil Code, which protects the rights of all women, and the BJP reiterates its stand to draft Uniform Civil Code, drawing upon the best traditions and harmonizing them with the modern times,”.