Flood Threat In Mahanadi Adds To Woes Of Odisha

Thousands of people in Mayurbhanj, Keonjhar, Balasore, Bhadrak, Jajpur, Kendrapara, Cuttack and Puri districts have been marooned as flood water inundated hundreds of villages in these districts 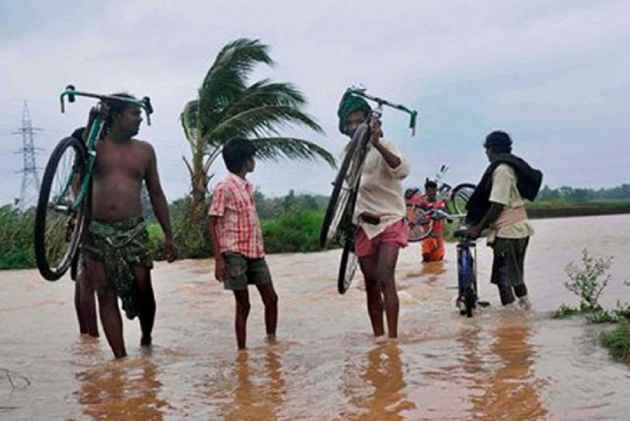 While floods in rivers Budhabalanga, Subarnarekha, Brahmani and Baitarani have already played havoc in vast areas in the northern districts of the state, incessant rains in the upper catchment areas have raised the spectre of floods in the downstream of Mahanadi, the lifeline of Odisha.

The Hirakud dam, which controls flood water in Mahanadi, has opened 46 sluice gates to release excess water flowing in from the upper catchment in neighbouring Chhattisgarh. Special Relief Commissioner (SRC) Pradeep Jena told media persons that 8.78 lakh cusecs of water was flowing into the dam while 7.57 lakh cusecs was flowing out at 1 pm today. With the inflow having increased by over 1 lakh cusec, the water level in the reservoir is increasing by 8 cm every hour. The water level in the reservoir stood at 626.27 feet, as against the full capacity of 630 feet, when reports last came in, the SRC said.

With the Hirakud dam releasing excess water, around 10.5 lakh cusecs of water is likely to flow through the Mundali bridge, which could lead to a medium level flood in Mahanadi, Jena had said last evening. The Mahanadi is already flowing above the danger mark at Khairamal, sources said.

Thousands of people in Mayurbhanj, Keonjhar, Balasore, Bhadrak, Jajpur, Kendrapara, Cuttack and Puri districts have been marooned as flood water inundated hundreds of villages in these districts. The Bhattarika temple in Baramba area in Cuttack district got completely submerged and the idol of Maa Bhattarika, the presiding deity, had to be removed from inside the temple as the swirling water of Mahanadi gushed into it. Vast areas in Banki sub division were inundated and marooned after a 30-feet wide breach in the Mahanadi at Gayalabanka. Thousands of acres of paddy crop have got submerged under water in these districts, reports reaching from the ground said.

At least nine persons have already been reported dead, most of them due to wall collapse caused by heavy rains or flood water, in flood-related incidents in the state. Four of the deaths were reported from Mayurbhanj district, two from Keonjhar and one each from Sundargarh, Nuapada and Dhenkanal districts. In the latest incident of death due to flood-related reasons, the body of a youth, who had gone missing since yesterday after going for a bath in the river, was found by rescuers this morning in Bhuban in Dhenkanal district.

The situation is likely to worsen further this evening onwards when excess water released from Hirakud reaches the Mahanadi delta.

With the government machinery already stretched to the limits in fighting the Covid-19 pandemic, rescue and relief operations haven’t moved into top gear yet. Chief Minister Naveen Patnaik has asked senior IAS officers to immediately proceed to the worst affected districts and oversee rescue and relief operations, chief secretary Asit Padhi informed.
With the flood threat looming large, the Odisha government has asked collectors of all districts in the downstream of Mahanadi to stay alert for floods. National Disaster Response Force (NDRF), Odisha Disaster Rapid Action Force (ODRAF) and fire service personnel have already been pressed into service for rescue and relief operations in the areas already affected and kept in readiness in other areas likely to be affected by the floods in Mahanadi, sources in the government said.