For Congress, OROP Is 'Only Rahul Only Priyanka', Says Amit Shah 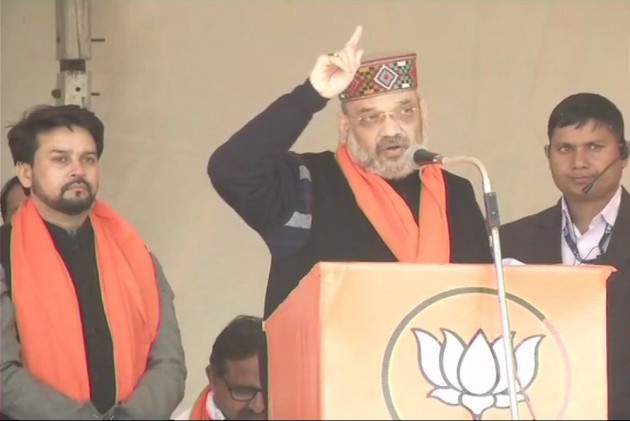 For the Congress, OROP means 'only Rahul, only Priyanka', said BJP president Monday, giving a novel expansion to the acronym for 'one rank, one pension' scheme.

The BJP president gave the sarcastic expansion to the acronym while addressing a "BJP Panna Pramuk Sammelan" at Hamirpur, also known as "Martyrs' Land" owing to the large population of the district and adjoining areas working in the Army.

The BJP president made the jibe days after induction of the party president Rahul Gandhi's sister Priyanka Gandhi as the Congress general secretary for the eastern Uttar Pradesh.

Thanking Himachal Pradesh voters for ensuring the victory of BJP candidates on all four Lok Sabha seats in the state during the 2014 general elections, Shah said, "The Modi government implemented OROP for ex-servicemen in true sense."

No one cared for soldiers for over 70 years, when the Modi government came to power, it implemented the OROP, he added.

The country wants a government which can give Pakistan a befitting reply for killing its soldiers, he said.

They couldn't provide even a gas cylinder to each household in the country, he said.

Himachal got only Rs. 44,325 crores from the 13th Finance Commission during the Congress government, while the Modi government gave Rs. 1,15,865 crores to this hilly state, he added.

Without naming former Himachal Pradesh Chief Minister Virbhadra Singh and his family members, Shah said, "No one else except raja, rani and rajkumar was given importance during five-year term of the previous Congress government in the state."

On the contrary, the Himachal residents now feel that the Jai Ram Thakur-led BJP government is their own government, he said, adding a total of 20,062 complaints out of 25,227 have been redressed in Jan Manch programmes launched by the Thakur government.

BJP workers are the basis of our victory and every BJP Panna Pramukh is determined to make Modi the PM again, said Shah, coining a slogan "mera booth, sabse majboot" for the party workers.