The Dzukou range in which the majestic Dzukou valley, a tourist hot spot in Nagaland is located, caught fire on Tuesday afternoon. 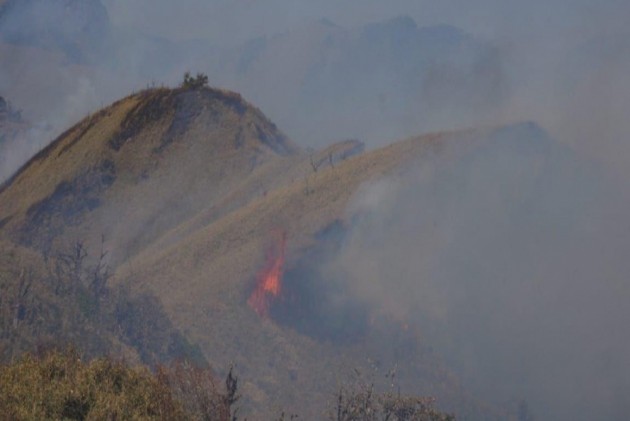 The forest fire raging in Dzukou range in Nagaland has been brought under control with the help of Indian Air Force helicopters, police, forest department and local volunteers, officials said on Saturday.

The Dzukou range in which the majestic Dzukou valley, a tourist hot spot in Nagaland is located, caught fire on Tuesday afternoon.

Efforts to extinguish the wildfire in Dzukou range continued for the fifth day on Saturday, sources said.

On the Nagaland side, it is relatively controlled because of the preventive measure taken by the Kohima District Disaster Management Authority along with personnel from forest, police, fire and emergency services and volunteers from Southern Angami Youth Organisation.

The fire has also spread to neighbouring Senapati district of Manipur.

"Based on the requisition by the state government, an IAF Mi-17V5 helicopter equipped with Bambi bucket for firefighting was used in Dzukou valley near Kohima," said PRO (Defence) Kohima, Lt Col Sumit K Sharma.

The IAF choppers conducted recce on Thursday, said Sharma, adding that the mission is still on and it would continue even on Saturday.

About the fire being completely doused, Raungmei said, "We can't rule out because as per the pilots there are multiple spots where the fire is burning".

Divisional Forest Officer (DFO) Kohima Rajkumar M said that as per the latest information from the Range Officer, Kohima, a stretch of about 5 km fire line has been cut in the priority area. As per the present situation, the main valley is safe from fire, he said.