Former Punjab CM Captain Amarinder Singh recently floated his own party Punjab Lok Congress after quitting Congress. The BJP has announced that it will the upcoming Punjab assembly elections jointly with Singh’s party. 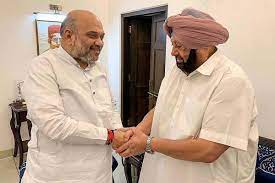 The BJP has announced that it will contest the Punjab assembly polls in alliance with Singh's party.

The meeting is underway at Shah's residence where all three are present.

Singh has been meeting various BJP leaders to chalk out a strategy for the Punjab elections.

Both parties are expected to take various offshoots of the Akali Dal on board and forge a bigger alliance.