Congress government in Puducherry is tottering to survive having lost its majority in the Union Territory’s Assembly with the resignation of four MLAs. 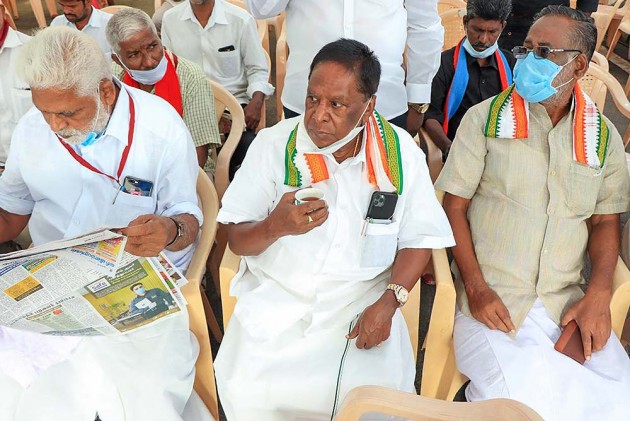 On a normal day Puducherry Chief Minister V Narayanaswamy would have had something to cheer as the President replaced his bête noire – Lt. Governor Kiran Bedi – with Telangana Governor Tamilisai Soundararajan. Narayanaswamy had been locked in a searing battle of wits with Kiran Bedi during the nearly five years of his term which even resulted in his ministers holding a dharna before the Lt. Governor’s bungalow.

The crisis for the Congress began three weeks ago when two of its MLAs including the number two minister – E. Namassivayam - quit the party and Assembly and joined the BJP. In the last two days, the state health minister and another MLA also quit the Assembly and the party. The 33 member house (which includes three nominated MLAs of the BJP) presently has a strength of 28 after the resignation of the four MLAs and the disqualification of another MLA under the anti-defection law.

With the resignations, the Congress, with the support of the DMK and a lone independent, commands the support of only 14 MLAs which is one short of majority. The Opposition also has 14 MLAs - seven of the N R Congress, four of the AIADMK and three nominated MLAs of the BJP. With speculation about two more Congress MLAs on the verge of quitting the Narayanaswamy government, it would be reduced to a minority and could be dismissed. Probably in anticipation of a short spell of President’s Rule, the Centre also moved out the unpredictable Kiran Bedi out of the Governor’s house and asked the Telangana Governor to manage the Union Territory.

Kiran Bedi was specifically posted to Puducherry in May 2016– after her unsuccessful bid to challenge Arvind Kejriwal in the Delhi state elections – when the Congress won the elections in Puducherry by surprising the NR Congress led by Rengasamy. Since then, she has been locked in a war of nerves and words with Narayanaswamy with the latter accusing her of interfering in the UT administration. She rebutted the charge that she was only ensuring efficiency and transparency that centrally funded schemes were reaching the intended beneficiaries.

Recently Narayanaswamy’s relations with the DMK had also soured with the regional party projecting former Union minister Jagathrakshagan as a chief ministerial candidate. Only after Sonia Gandhi personally rang up DMK President M.K. Stalin the DMK backed down. But with his own MLAs deserting him following the BJP inspired rebellion, Narayansawamy’s days as chief minister appeared numbered- with no help required from the Lt. Governor.