The TMC, however, has distanced itself from the comment, stating that Sheikh Alam, seen in the video, is not a member of the TMC. 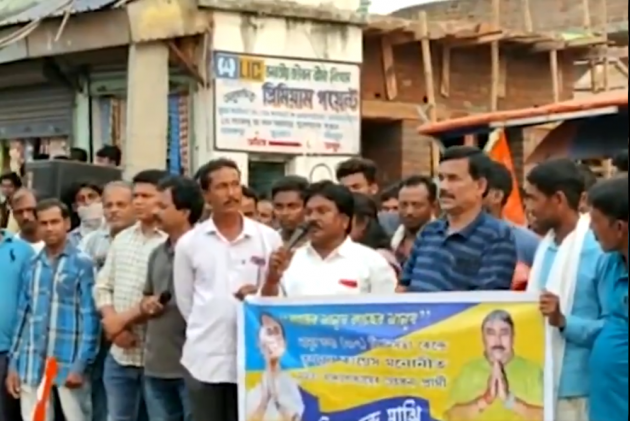 A local leader, surrounded by people holding a TMC poster, was heard stating "four Pakistan can be created if India's 30 per cent Muslims unite", in a video.

The leader has drawn major flak from the BJP, which sought to know if Bengal's ruling party endorses such remarks.

The TMC, however, has distanced itself from the comment, stating that Sheikh Alam, seen in the video, is not a member of the TMC, and the party doesn't support what he said.

The 30-second video, apparently shot at Nanoor in Birbhum, has gone viral on social media.

Alam is heard saying in the clip, "We minorities constitute 30% (of the population). The rest make for 70%.

They (BJP) think they will come to power (in Bengal) with the help of this 70%. If 30% of minorities unite, if India's Muslims unite, four Pakistan can be created. Where will India's 70% go?"

"This video brings out the truth about the TMC. This is a serious thing. How can someone staying in India claim that he will turn the country into Pakistan? We will never allow this to happen. Mamataji owes a reply to the people of the state and the country," he said.

"Yday, TMC leader Sheikh Alam, giving a speech in Basa para, Nanoor, in Birbhum AC said, if 30% Muslims in India come together, then 4 Pakistan can be formed... He obviously owes his allegiance to Mamata Banerjee... Does she endorse this position? Do we want a Bengal like that?" he tweeted.

TMC Birbhum district president Anubrata Mandal, however, quickly clarified that Alam was not a leader of the state's ruling camp.

"Sheikh Alam is neither a member of the party nor is he a leader from Nanoor. We have no relation with him. We dont support such statements. India is a secular country and will remain so, he said.

Sheikh, when approached by reporters, said his words have been misinterpreted.

I never said we want to build a Pakistan in India. I just wanted to convey that if the Muslims are threatened, then we, too, know how to care of ourselves," he said.