Amit Shah came down heavily on the Congress, saying the interests of one family prevailed over the party and national interests. 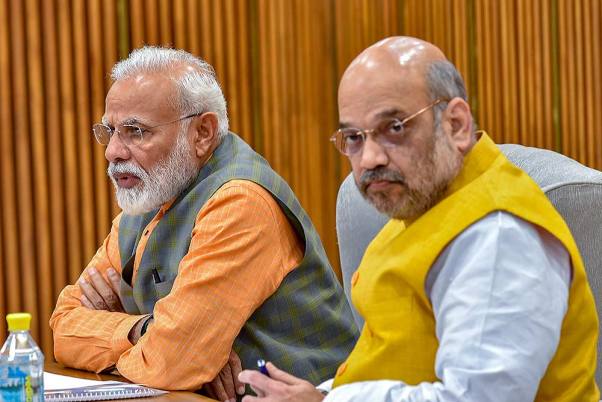 On the 45th year of the imposition of Emergency in the country, the BJP on Thursday took on Congress and accused the Grand Old Party of “trampling free speech” and “committing atrocities”.

Prime Minister Narendra Modi said the sacrifice of people who fought for democracy during the Emergency will never be forgotten.

"Emergency was imposed on the country exactly 45 years ago. I salute the people who fought for the protection of India's democracy and faced torture," Modi tweeted in Hindi.

Union Home Minister Amit Shah came down heavily on the Congress, saying the interests of one family prevailed over the party and national interests, and questioned why the 'Emergency mindset' still remained in the opposition party.

Shah claimed leaders are feeling suffocated in the Congress and the party's disconnect with people keeps widening.

"On this day, 45 years ago one family's greed for power led to the imposition of the Emergency. Overnight the nation was turned into a prison. The press, courts, free speech...all were trampled over. Atrocities were committed on the poor and downtrodden," he said in a series of tweets.

Former prime minister Indira Gandhi had imposed Emergency on June 25, 1975 and it continued till March 21, 1977.

The home minister said due to the efforts of lakhs of people, the Emergency was lifted, democracy was restored in India but it remained absent in the Congress.

"The interests of one family prevailed over the party's interests and national interests. This sorry state of affairs thrives in today's Congress too!," he said.

Information and Broadcasting Minister Prakash Javadekar launched a sharp attack on the Congress, saying those who killed democracy 45 years ago are questioning the government today.

Javadekar's attack came on the 45th anniversary of the imposition of Emergency by the then Indira Gandhi-led government.

"I wonder, those who killed democracy 45 years ago are questioning the government today. The party that suppressed the entire system, ended the freedom of all and jailed scores of people, particularly from the opposition, is now raising slogans of freedom," he asked.

The "power hungry" Congress government, Union Finance Minister Nirmala Sitharaman said, took away the rights of the people by clamping emergency this day 45 years ago and when the very same party spoke on democracy it was anguishing.

Recalling that the emergency came into effect in India on June 25, 1975, she said, it was promulgated by the "power hungry Congress party and they created a huge challenge for democracy by coming up with emergency."

Addressing BJP Tamil Nadu unit party workers via a virtual rally, she said: "People's rights were completely rejected. Why did the Congress party do it?It was hankering for power, it was for the sake of office. The law was broken and an emergency was declared."