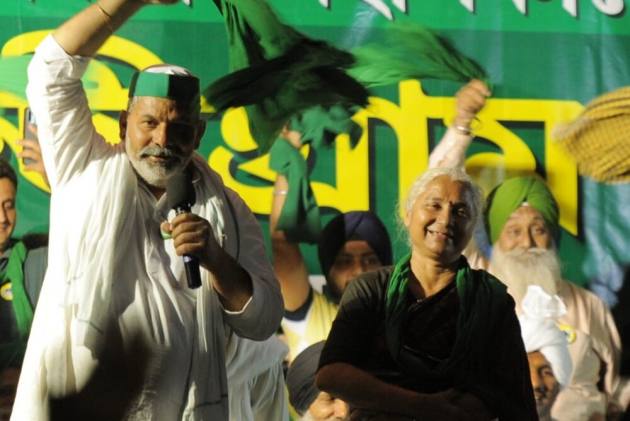 Samyukta Kisan Morcha leaders, including Rakesh Tikait and Medha Patkar, lashed out at the BJP and called for defeating them in the coming West Bengal Assembly elections, particularly in Nandigram.

Patkar, in particular, took sharp jibes at Suvendu Adhikari, Mamata Banerjee's one-time pointsman for Nandigram and the outgoing Nandigram MLA who is now contesting against chief minister Mamata Banerjee on a BJP ticket.

Nandigram has emerged as the state's most high-profile constituency after Banerjee, following Adhikary's resignation and joining the BJP, decided to change her own seat from Bhawanipur in Kolkata to Nandigram 130km southwest of her south Kolkata home.

Medha Patkar was part of the anti-displacement movement in Nandigram during 2007-08 that not only turned out as one of the most-talked-about land struggles in India but also had its role in the change of regime in Bengal in 2011 and scrapping of the Land Acquisition Act of 1894 in 2013. Patkar shared many a dais with Mamata Banerjee and Suvendu Adhikary during those days.

On Saturday, while addressing an audience of a few hundred people in Nandigram from the dais of Samyukta Kisan Morcha, Patkar reminded people of those days.

“Nandigram had no place for religious divides. I vividly remember how Hindus and Muslims fought it together. Now, if Suvendu Adhikary comes and tells you about the religious divide, don't listen to him. None will forgive Suvendu if he tries to divide in the name of religion," she said.

Patkar recalled names of places where she had been during that time and named some people she remembered.

“I still remember the slogan Amar Gram Nandigram. It's a land of a revolutionary struggle and it should also emerge as a centre of this new struggle of the farmers," she said, referring to the ongoing farmers' movement in north India.

"This movement paved the path for replacing the British law (of 1894) but now the Modi government wants to dilute that new law (enacted in 2013)," Patkar said.

Incidentally, Patkar almost echoed what Mamata Banerjee has been saying since announcing her candidature from Nandigram.

Responding to Adhikary's charge that she chose Nandigram depending on "62,000" voters --- an obvious reference to the number of Muslims voters who make roughly one-fourth of Nandigram's population --- Mamata Banerjee had on March 9 said, "During the Nandigram struggle, Hindus and Muslims offered prayers side by side. They will try to talk of 70-30 (demographic reference) but don't listen to them. We are fighting for 100 per cent.”

On Saturday, Patkar also urged people to ask Adhikary about the relation between him receiving a notice from the CBI and switching camp.

Speaking from the dais, Manjeet Singh Dhaner, another senior leader of the Kisan Morcha, urged people not to vote for “purchased leaders”.

"Throughout the country, the BJP is growing by purchasing leaders from Opposition parties. Don't vote for these turncoats," said Dhaner.

Rakesh Tikait too lashed out at the BJP. "The BJP must be defeated to be taught a lesson. They are planning to ruin the lives of farmers to help big industrials gain. It's not just about these three laws. They are bringing more anti-people laws related to the fishery, animal husbandry, and farming," Tikait said.

The Kisan Morcha leader said that "more than 40 anti-people laws" were in the pipeline that will ruin common people's lives.

"The masses will get trapped in the whims of big industries. They are trying to create cheap labour for industries and that's why they want to destroy rural economy," he said, calling upon the people of Nandigram to defeat the BJP.

There was no visible organised effort on the part of the TMC to bring the crowd to the venue. The Kisan Morcha leaders have said they will not seek vote for any particular party, they will only ask for a vote against the BJP.

The CPI(M)'s farmers wing is a part of the ongoing farmers' movement in north India and the party's politburo member Hannan Mollah, who hails from West Bengal, is one of the faces of the farmers' movement in north India. The CPI(M), too, has its Congress-supported candidate in Nandigram but Mamata Banerjee is more likely to benefit from this Kisan Morcha event, being the strongest contender and herself having a pro-farmer image.

Almost all leaders of the Kisan Morcha hailed the special place for Nandigram in the country's mass movement creating a massive impact on policies.

Incidentally, the rally took place a day before the 14th anniversary of the infamous March 14 (2007) police firing in Nandigram that killed 13 protesters.

On Sunday, both the TMC and Suvendu Adhikary have their own events to pay respect to the “martyrs”.