Irani, when in Opposition, would take to the streets even if prices of petrol and diesel rose by Rs 5 per litre, but today she is 'completely silent', said Youth Cong chief Srinivas B V. 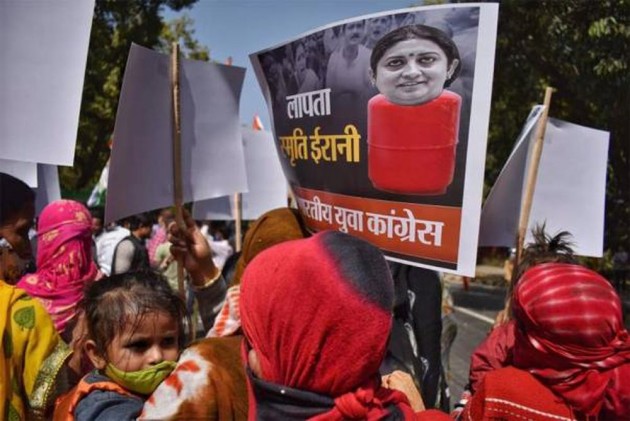 Irani, when in the opposition, would take to the streets even if prices of petrol and diesel rose by Rs 5 per litre, but today she is "completely silent" as the country faces an "all-round inflation", said Indian Youth Congress (IYC) president Srinivas B V.

"Today, the Youth Congress has tried to awaken her from sleep. Petrol price has crossed Rs 100 a litre, diesel has crossed Rs 90 in many parts of the country, and the price of cooking gas cylinders are increasing day by day," he said.

"What is shameful is that despite this kind of open loot, the BJP government" is trying to shift the blame, he added.

He said Petroleum Minister Dharmendra Pradhan's statement that fuel prices will go down once the winter ends was "stupid" and went ahead to demand his resignation.

The leader asked the central government to reduce the prices of petrol, diesel, and gas with immediate effect.

"People of the country had chosen PM Modi and his ministers on the promise of 'aache din', now the trust of PM Modi and his government has been broken. Farmers, youth, labourers, businessmen, women are badly suffering from inflation. The anti-people and anti-national face of RSS and BJP has come out," he alleged.