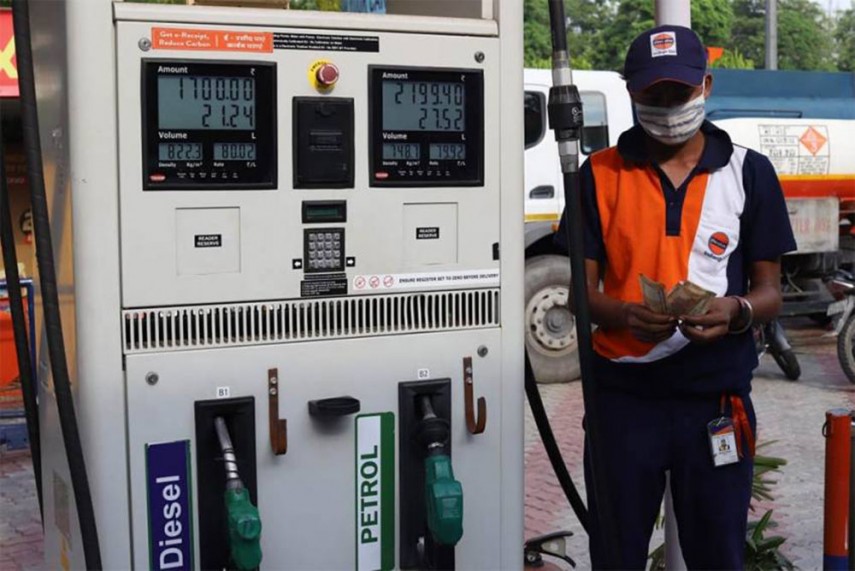 With five states heading for Assembly elections early next year, the row over fuel prices seems to be assuming political overtones. At least 23 states and Union territories have reduced the Value Added Tax (VAT) on fuel after the Centre slashed the excise duty on petrol and diesel during the festive season last week. This has set off a war of words between the Opposition ruled states and the Bharatiya Janata Party (BJP) with both shifting blame on each other for not taking steps to control record-high fuel prices.

After the Centre cut petrol and diesel prices by Rs 5 and Rs 10 respectively, many BJP-ruled states such as Gujarat, Uttar Pradesh, Karnataka, Tripura, Goa, Uttarakhand, Manipur, Assam, Bihar and Haryana also followed suit and announced cuts in Value Added Tax (VAT) levied on petrol and diesel. Of these states, Uttar Pradesh, Uttarakhand, Goa and Manipur are gearing up for assembly polls in a few months. Out of the 23 state governments which slashed VAT, most are ruled by BJP or NDA alliance except for the Congress-ruled Punjab which will be going to polls early next year. Taking a cue from the Centre, the Punjab government announced a further cut of Rs 10 for petrol and Rs 5 for diesel on Sunday.

According to a release by the Ministry of Petroleum last week, there are now 13 states and union territories that have not announced any cut in VAT. The states include Maharashtra, NCT of Delhi, West Bengal, Tamil Nadu, Telangana, Andhra Pradesh, Kerala, Meghalaya, Andaman and Nicobar, Jharkhand, Odisha, Chattisgarh, and Rajasthan.

The Fool Who Increased VAT Will Have To Reduce It: KCR Attacks Centre On Fuel Prices

There are two kinds of taxes on petrol and diesel in the country. The central government levies excise and cess on the five fuels while state governments impose add-on value-added taxes (VAT). Varying VAT is the reason fuel prices differ across the country.

The Opposition parties argue that the Centre has done very little by slashing fuel prices and it was only a damage control exercise after suffering electoral reverses in the recent by-elections in 29 Assembly seats and three Lok Sabha Constituencies across 13 states. The ruling BJP government lost three Assembly seats and a Lok Sabha seat in Himachal Pradesh, which the state BJP leaders attributed to inflation and the high fuel prices.

Speaking to Outlook, former Kerala Finance Minister Dr Thomas Isaac said that any question on state slashing VAT will arise only after the Centre rolls back the excess taxes, which were imposed earlier.

“Let the central government roll back all the additional taxes, which they levied. The Centre has increased the taxes for diesel by nine times and petrol by 300 times. From that, they have given a concession of about 30-40 per cent now. Let them roll back the rest and then the prices will come back to the earlier one. Let them do it first and then we will think about any further decision on our part,” said Isaac, adding that the government wouldn’t go for further cuts as it hasn’t increased any fuel price in the last seven years. “In fact, the first Pinarayi government has reduced fuel prices by one per cent,” says Isaac.

The former cabinet minister also said that the central government decided to slash the excise duty after suffering setbacks in the bypolls in West Bengal, Rajasthan and Himachal Pradesh. “Now that the Assembly elections to five states are round the corner, they want to put the onus on state governments,” said Isaac.

Another opposition ruled state Rajasthan also has expressed its unwillingness for further reduction in VAT on fuels. Dr Mahesh Joshi, chief whip in Rajasthan Assembly told Outlook that the Centre’s move to cut fuel prices was a political one and the reduction of the central excise will automatically lead to the lowering of the state’s VAT collection.

“The Centre has planned this in a way so that the revenue of the states will also go down,” said Joshi.

He also demanded that the Centre should do more and cut the additional excise duty which was imposed on states.

“The fuel price cut has political undertones. They will increase it again after the elections,” said Joshi.

The government's collection from levy of excise duty on petroleum products has risen 33 per cent in the first half of the current fiscal to over Rs. 1.71 lakh crore, from Rs. 1.28 lakh crore mop-up in the same period of the previous fiscal. When compared with pre-Covid levels the increase is around 79 per cent according to data available from the Controller General of Accounts (CGA) under the Finance Ministry.

The RBI too has been urging the central government to reduce the excise duty to cool fuel prices due to its correlation to inflation. High petroleum prices have a deep bearing on consumer price of goods right from daily use items including food due to higher cost of transportation. Rising cost of cooking fuel has also been hitting household budgets.

While the Opposition ruled states such as Telangana and Andhra Pradesh are facing pressure from BJP and other opposition parties to reduce VAT, both the governments don't seem to toe the line.

Along with other Chief Ministers of opposition ruled states, Telangana Chief Minister K Chandrashekhar Rao has also joined the chorus for more respite from the Centre and to cut the cess on petroleum products. Rao also took a jibe at the BJP questioning its moral right in asking states to reduce VAT on petrol and diesel.

While the opposition BJP has been exerting pressure on the Hemant Soren led Jharkhand government to reduce VAT on fuels, the government is yet to make its stand clear on the issue. “The fiscal health of most of the state governments are not good because of Covid and other constraints. On top of that, the Centre shows a hostile attitude towards opposition ruled states, which makes the situation worse,” says a Jharkhand Congress leader.

In Maharashtra too, the issue of VAT reduction is causing headache to the ruling MVA alliance with opposition BJP mounting pressure on the government. This has propelled Nationalist Congress Party (NCP) chief Sharad Pawar to demand the GST compensation from the centre which is due for long. “Centre should provide due GST compensation to the state at the earliest. It'll be possible to take this decision to help people only after it,” Pawar tweeted.

However, the BJP raises questions on the inability of opposition ruled states to cut VAT on petrol and diesel, which the BJP ruled states have already achieved. Isaac says that some states have the resources to do so.

"In response to the Modi government's reduction of fuel prices, several BJP governments immediately reduced prices further from Rs. 5 to Rs 12. Why have the opposition parties crying hoarse seeking reduction of prices not reduced them in states ruled by them? This shows their apathy towards the common man and their duplicity in raising issues on which they themselves hesitate taking action," BJP national spokesperson Nalin Kohli told Outlook.

“Kerala follows a policy of exhausting its allotted funds and permissible borrowings. It seems that some states have the resources since they don’t spend their funds,” says Isaac.

On the vexed issue of bringing petrol and diesel under Goods and Services Tax (GST), Isaac says “We must fix a rate which is revenue neutral so that the taxes are not affected and the income is not affected,”.

Since the introduction of the GST, crude oil, petrol, diesel, ATF and natural gas has been kept out of its ambit.

So far, most states have been resisting the increasing demand to bring transport fuels under GST, which will not just result in uniform prices but also lower them conditional to global prices. At the last GST council meeting under the directives of the Kerala high court, though the need to bring the five fuels under it was discussed, as expected it was overruled.

“A change in stance can only be expected due to political exigency or if the economy revives and the fiscal conditions of both the central and state governments improve,” says a senior energy expert.