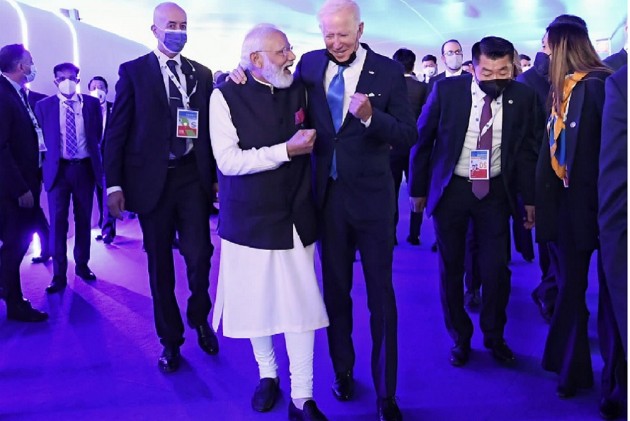 Prime Minister Narendra Modi on Saturday met US President Joe Biden and other world leaders on the sidelines of the G20 Summit.

The leaders exchanged pleasantries and showcased a spirit of camaraderie.

"On the sidelines of the @g20org Rome Summit, PM @narendramodi interacts with various leaders," the PMO said in the tweet.

In the pictures, Modi is seen walking with Biden in a half embrace, apparently sharing a light chitchat. The two leaders are seen happy to be in each other's company.

Biden hosted Modi at the White House on September 24 for their first in-person meeting.

In other photos, Modi is seen embracing Macron and engaged in an animated discussion with Trudeau and Johnson.

Earlier, all the world leaders participating in the G20 Summit, including Modi, gathered for a "family photo".

"World leaders meet in Rome for the @g20org Summit, an important multilateral forum for global good," the PMO said in another tweet.

On the sidelines of the @g20org Rome Summit, PM @narendramodi interacts with various leaders. pic.twitter.com/7L3vbpRzUs

Ahead of Prime Minister Modi's visit to Rome, Foreign Secretary Harsh Vardhan Shringla said that the G20 remains a valuable forum for India's engagement with major economies in the world and for setting the trends and norms for global economic development and recovery.

The prime minister will be participating in the G20 Summit in Rome from October 30-31 at the invitation of Italian Prime Minister Mario Draghi.

Italy has been holding the presidency of the G20 since December last year.

The forum has met every year since 1999 and includes, since 2008, a yearly summit, with the participation of the respective heads of state and government.

The Rome summit will be attended by heads of state and government of G20 member countries, the European Union, and other invited countries and several international organisations.

The summit will be centred around the theme 'People, Planet, Prosperity, focussing on the areas of recovery from the pandemic and strengthening of global health governance.

From Rome, Modi will travel to Glasgow on Sunday to attend the World Leader's summit of the 26th Conference of Parties (COP-26) to the United Nations Framework Convention on Climate Change (UNFCCC).