Banerjee's Sunday visit was planned on Saturday after reports of an attack on three TMC youth wing leaders from Bengal in Tripura reached Kolkata. 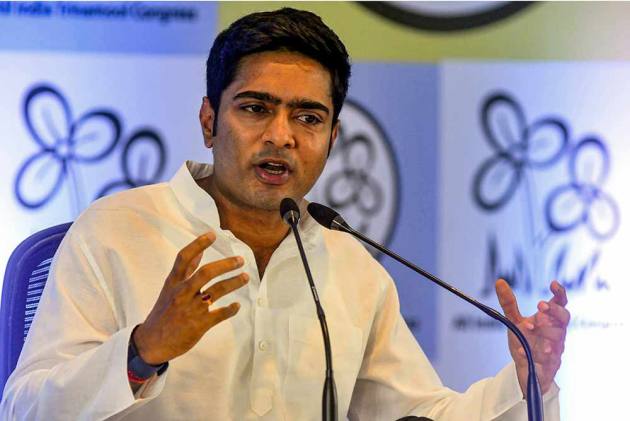 Showing visible keenness to turn the table on the BJP government in Tripura, the Trinamool Congress (TMC) all India general secretary and Bengal chief minister Mamata Banerjee’s nephew Abhishek Banerjee reached Tripura on Sunday. The visit is his second one in six days with Banerjee arriving this time to protest the highhandedness of the Biplab Deb government in Bengal’s neighbouring northeastern state.

His Sunday visit was planned on Saturday after reports of an attack on three TMC youth wing leaders from Bengal in Tripura reached Kolkata.

Abhishek, sharing photos of those injured from his Twitter account, said: “The GOONS of @BJP4Tripura have shown their TRUE COLOURS! This barbaric attack on Trinamool workers reveals the 'GOONDA RAJ' in #Tripura under @BjpBiplab's Govt.! Your threats and attacks only prove your inhumanity. DO WHAT YOU CAN… Trinamool will not budge an INCH!”

The GOONS of @BJP4Tripura have shown their TRUE COLOURS!

Abhishek Banerjee Back In Tripura Amid Arrests, Alleged Assault Of TMC Leaders

This barbaric attack on Trinamool workers reveals the 'GOONDA RAJ' in #Tripura under @BjpBiplab's Govt.!

Your threats and attacks only prove your inhumanity.
DO WHAT YOU CAN.. Trinamool will not budge an INCH! pic.twitter.com/9K6ZPECrNq

A few hours later, he announced he will be visiting Tripura on Sunday to stand by the attacked TMC workers and those who were arrested for protesting the attack.

On Saturday, following an alleged attack on TMC youth wing leaders Debangshu Bhattacharya, Jaya Dutta and Sudip Raha, a team of TMC workers in Tripura staged a protest outside a police station for the entire night, demanding action against the attackers. The police had also kept the three attacked TMC leaders inside the police station compound for the whole night.

On Sunday morning, the police arrested Bhattacharya, Dutta and eight others who were demonstrating outside the police station demanding the release of the three and action against attackers. The 11 arrested persons were booked for violating the night curfew imposed under the Disaster Management Act.

Protesting the arrest, Debangshu Bhattacharya said, “The attack happened around 2.30 pm. Since then, the police kept telling us to stay indoors because we could face attacks if we tried to move on our own. The night curfew starts at 7 pm and a police vehicle was sent to us at about 6.30 to escort us. Then they took us to the police station and kept us detained there, only to announce on Sunday morning that we had been arrested.”

According to the last update from Tripura, the arrested TMC leaders have been taken to a court.