Amid Covid-19 pandemic, a triple murder case followed by another alleged retaliatory killing have left the political atmosphere in Bihar surcharged, bringing back memories of an era when such incidents were not uncommon in the state. 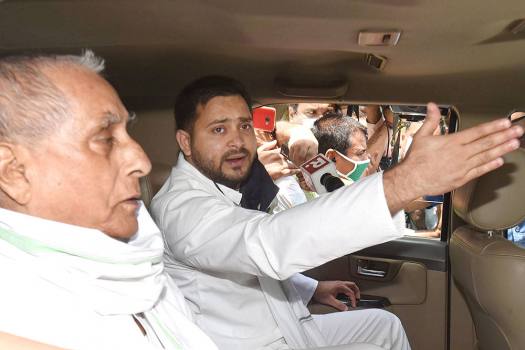 RJD leader Tejashwi Yadav reacts as police stop him from going to Gopalganj for a protest march over a triple murder case, during ongoing COVID-19 lockdown, in Patna.
PTI Photo
Giridhar Jha 2020-05-29T14:52:57+05:30 Gang War Shifts Focus From Fight Against Covid To Crime-politics Nexus In Bihar

Even as Bihar continues to grapple with the rising number of Covid-19 cases following the continual return of the teeming migrants from different parts of the country, a gang war appears to have shifted the focus back to the age-old politics-crime nexus in the state.
Barely a few months before the assembly polls are scheduled to be held, Bihar has witnessed a spurt in crime in Gopalganj district with back-to-back killings of people owing allegiance of rival political parties. The naming of a ruling Janata Dal-United legislator, Amarendra Pandey, as a conspirator in a triple murder case followed by an alleged retaliatory killing of one of his close associates have left the political atmosphere surcharged, bringing back memories of an era when such incidents were not uncommon in the state.

Earlier this week, three persons – the parents and a brother of an RJD leader Jai Prakash Yadav – were gunned down in a shootout at the latter’s residence in Gopalganj. An FIR was subsequently lodged on the basis of a statement of an injured Yadav, who named the JD-U legislator as a conspirator in the case. While Pandey’s kin, who were named accused, were promptly arrested, the MLA was not taken into custody, prompting leader of the opposition Tejashwi Prasad Yadav to accuse Chief Minister Nitish Kumar of shielding his party legislator. The government, however, set a special investigation team to probe the killings.

However, barely a couple of days after the murder of the three members of an RJD leader’s family, Munna Tiwari, a relative of the JD-U legislator, too was shot dead in Gopalganj district, triggering panic in the area. The local police believe that Tiwari’s killing was carried out in retaliation to the triple murder.

The FIR against the JD-U legislator in Gopalganj, the home district of Lalu Prasad Yadav, has given ammunition to the RJD to fire salvos at the Nitish Kumar government. On Friday, led by former chief minister Rabri Devi, Tejashwi and his elder brother Tej Pratap Yadav, planned a party legislators’ march from Patna to Gopalganj to press the government for the arrest of JD-U MLA, but the police did not allow them to move because of the lockdown restrictions.

The RJD leaders claimed they had sought prior permission to take out the march promising to adhere to all the social distancing norms on the way but they were denied to do so amid a high-voltage drama.

Tejashwi and his party leaders have lately been hitting out at the Nitish Kumar government for its allegedly inept handling of the migrant crisis in the wake of the outbreak of the coronavirus pandemic, but the shootouts in Gopalganj have given them a fresh salvo to fire at the JD(U)-BJP government in the election year.

While Pandey, the JD-U MLA who is said to be facing criminal cases, has denied the charges, the NDA leaders have accused Tejashwi of trying to politicise the killings at a time when the state is facing the Covid-19 crisis.

Tejashwi, who was away in Delhi for nearly two months during the lockdown, came back to Patna earlier this month by road to launch a campaign against the Nitish government accusing it of being insensitive towards the mounting plight and predicament of the Bihari people returning home from different states during the lockdown. The naming of a JD-U MLA in the triple murder case appears to have given an impetus to him to intensify his campaign against the Nitish government in the all-important election year.