As the convoy reached Barra police circle in Kanpur, the vehicle in which Vikas Dubey was seated, overturned after skidding on the road due to heavy rains. He snatched a rifle and tried to shoot at the cops but was killed in retaliation. 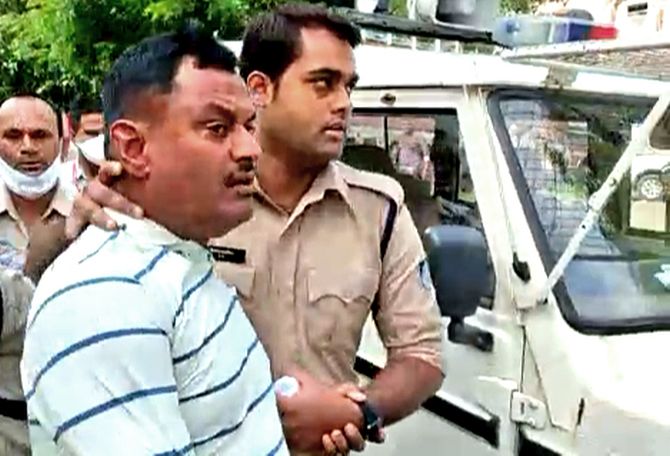 Gangster Vikas Dubey was killed in an encounter on Friday after a police vehicle carrying him from Ujjain to Kanpur met with an accident and he tried to escape from the spot in Bhauti area, police said.

Four policemen, including an inspector posted in Nawabganj, were injured in the accident, IG, Kanpur Range, Mohit Agarwal said.

Senior Superintendent of Police (Kanpur) Dinesh Kumar P said that the accident took place in the morning when it was raining heavily and the police vehicle overturned near Kanpur.

Agarwal said Dubey tried to flee with the inspector's pistol but was surrounded by the police team and he was injured in an exchange of fire.

He was rushed to the hospital where he was declared dead. The gangster was the prime accused in the Kanpur ambush in which eight policemen were killed.

"Dubey was injured in the encounter and he was declared dead in the hospital," ADG Kanpur range J N Singh said.

The officer confirmed that Dubey "sustained injuries", but did not confirm to what extent, saying it would be revealed in the post-mortem report.

Priyanka Gandhi asked on Twitter in Hindi that while the criminal is gone, what about those protecting him.

Gandhi had earlier demanded a CBI probe on Thursday to ascertain the facts about the "grant of protection" to Dubey. She had also accused the BJP government in Uttar Pradesh of "complete failure" in handling the Kanpur ambush case.

Akhilesh Yadav raised questions on the gangster's killing after an accident, saying the car did not topple but it was an effort to save the government from toppling if facts came to light.

"Darasal ye car nahi palti, raj khulne se sarkar palatne se bach gayi hai," (Actually, the car did not topple. It is an effort to save the government which would have toppled if facts came to light)," Yadav said in a tweet in Hindi.

Eight policemen, including DSP Devendra Mishra, were ambushed in Bikru village in Chaubeypur area of Kanpur when they were going to arrest Dubey and fell to bullets fired from rooftops shortly after midnight on July 3.

Also Read | Hours Before Vikas Dubey's Killing, Plea In SC For Probe In Killing Of His 5 Aides

While on July 3, two of his associates, Prem Prakash Pandey and Atul Dubey, were killed by police in an encounter in Kanpur, on July 8 the police killed another aide, Amar Dubey, who carried a reward of Rs 50,000, in Maudaha village in Hamirpur district.

On July 9, two more aides of gangster Vikas Dubey, wanted in connection with the Kanpur ambush, were killed in separate encounters in Kanpur and Etawah districts.

While Kartikeya alias Prabhat was killed in Kanpur when he tried to flee from police custody, another aide of Vikas Dubey, Praveen alias Bauwa Dubey, was shot dead in an encounter in Etawah.

Kartikeya, who was arrested from Faridabad on Wednesday, was being brought to Kanpur on transit remand when he snatched the pistol of a policeman and tried to flee.

Vikas Dubey, who was carrying a reward of Rs five lakh on information leading to his arrest, was arrested from Ujjain in Madhya Pradesh on Thursday.

Also Read | 'But What About Those Who Gave Patronage?': Opposition Questions Govt Over Vikas Dubey's Killing