'Gear Up For Assembly Polls, We Will Get Majority In J&K,' NC Chief Farooq Abdullah To Party Workers

Farooq Abdullah said preservation of Article 35A and Article 370 of the Constitution would be the priority for his party. 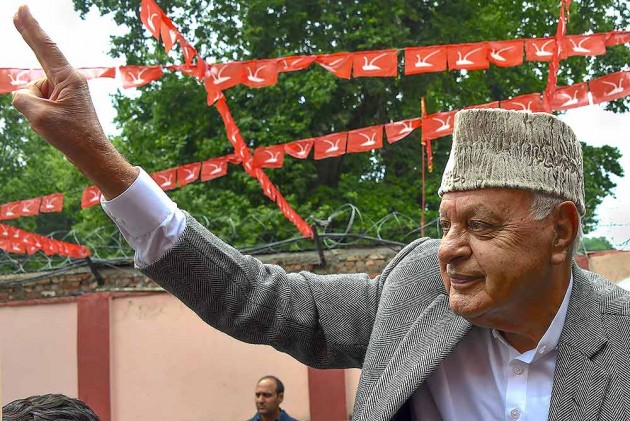 A day after the National Conference (NC) won all three Lok Sabha seats in Kashmir Valley, party president Farooq Abdullah on Friday said they will get a majority in assembly elections too whenever they are held. He also said that no matter how powerful the electoral mandate of Prime Minister Narendra Modi might have been, he cannot remove Article 370 and 35A.

Farooq said preservation of Article 35A and Article 370 of the Constitution would be the priority of the party.

“Our party has been talking about the restoration of the autonomy to Jammu and Kashmir, granting regional autonomy to all three regions of the state whether we were in opposition or in the power,” says Tanveer Sadiq, political advisor to NC vice president Omar Abdullah.

Farooq said grant of regional autonomy to Jammu, Kashmir, and Ladakh would continue to be the main plank of his party. He claimed the NC will form the next government in the state on its own.

“Gear up for assembly elections,” he told National Conference workers in Jammu.

He also praised Prime Minister Narendra Modi for his victory in Lok Sabha elections and said he hopes justice will be done with the people of Jammu and Kashmir.

Farooq said after the formation of the government with an absolute majority in the Assembly, the NC will work towards fulfilling regional aspirations of the people by granting regional autonomy.

The National Conference chief said the Centre will have to walk an extra mile in reaching out to the people, expedite development, complete rail project to link Kashmir with railways on an immediate basis and lay emphasis on dependable road communication.

“Our agenda is to foster amity and bridge the gap between various sections of the society”, he said. “Pluralistic ethos and inclusiveness are the greatest strengths of the state. I pledge my party will work towards the dignified return of Kashmiri Pandits to their homes,” he added.

In June 2018, Jammu and Kashmir government was placed under Governor’s rule after the coalition government between PDP-BJP collapsed as the BJP withdrew from the alliance. On December 19, 2018, the State was placed under President’s rule. The NC and other regional parties insisted that the Assembly elections be held in the state along with the general elections. However, the ECI refused to hold simultaneous elections security situation in the Valley.