For the past 30 years, Geelani had remained the pivot of Kashmiri separatism. Geelani was known for giving prolonged strike calls and one word from him brought Kashmir to a pause. 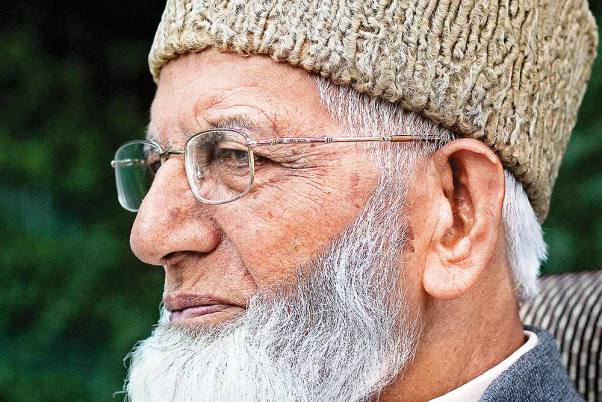 A lane leading to senior separatist leader Syed Ali Geelani's residence is heavily barricaded. The security personnel at the barricade said Geelani had been buried at the Hyderpora graveyard at about 3. a.m. Some distance from Geelani’s residence, locals say the security forces didn’t allow them to participate in the last rites of Geelani. “We all wanted to pay the last respects to the aged leader but we were not allowed. They placed heavy security all across the area making it impossible for anyone to step out,” he said. The family members of Geelani told reporters, the police denied their request to bury him in the morning. They said his body was taken and later buried under tight security at the midnight.

Veteran separatist leader and former Hurriyat Conference (G) chairman, Geelani died Wednesday evening at his Hyderpora Srinagar residence. Geelani, 92, developed serious complications on Wednesday afternoon and died on Wednesday evening. The ailing Geelani had been under house detention for more than a decade. His death comes when both factions of the Hurriyat Conference are under crackdown from the security and investigative agencies following the abrogation of Article 370 on August 5, 2019. Fearing a large funeral and protests the government at the midnight snapped internet including and phone lines and imposed curfew-like restrictions.

“With shock and grief, we inform (you) that the father of revolution Syed Ali Geelani passed away tonight,” tweeted Geelani’s Pakistan-based representative Abdullah Geelani.

On Thursday, Geelani's son, Naseem Geelani said the police snatched his body and buried it by themselves on Wednesday night without the participation of the family members. He said that they had sought time till 10 am Thursday for his burial.

For the past 30 years, Geelani had remained the pivot of Kashmiri separatism. He symbolized Kashmir’s hardline politics against Indian rule—the door that slammed shut in the face of even the occasional peace overture. Unlike some of his former associates, more amenable to dialogue, Geelani has all along enunciated the maximalist position: that the only condition for dialogue with New Delhi is that the latter accept Kashmir as a disputed territory.

During the surge of protests post the killing of militant commander Burhan Wani in 2016, Geelani refused to meet the parliamentary delegation that had knocked on his door at his Hyderpora residence. He described the overture as meaningless, saying they have neither the mandate nor “the intention to resolve” Kashmir. In two statements issued in September 2016, the then Hurriyat chairman asked India to accept Kashmir as a disputed territory and start demilitarisation to pave the way for a referendum—only that could “settle this issue permanently, peacefully and democratically,” he had said.

Geelani was known for giving prolonged strike calls and one word from was bringing Kashmir to a pause. At times, militants have even wished that, if their path brings them death, it must be Geelani who offers their funeral prayers. And he has obliged, giving funeral speeches on video in his chaste Urdu. That’s why many mainstream leaders painted him as the political vanguard of militant separatism.

Known for his pro-Pakistan stance, Geelani unlike other leaders has been also critical of Pakistan. In 1993 the All Parties Hurriyat Conference, an umbrella organization of around 26 separatist groups was formed which advocated for the resolution of Kashmir and Geelani was one of the founding members of amalgam. However, in 2003 Hurriyat Conference split with Geelani forming a separate Hurriyat Conference after moderate separatist leader Mirwaiz Umar Farooq agreed to engage with New Delhi and held four rounds of dialogue with New Delhi. The Mirwaiz group entered into a dialogue directly with New Delhi and held talks with the then Deputy PM, L K Advani, in 2004.

In the same year, Geelani founded Tehreek e Hurriyat and remained its chairman. In April 2005, Geelani led an APHC delegation met General Parvez Musharraf on the latter’s visit to India in New Delhi. Musharraf presented his famous Four Point Formula during this time. However, Geelani rejected the formula describing it compromise on the principled stand of Pakistan over Kashmir. Later when General Parvez Musharraf was removed as Pakistani president, Geelani described it as “good news” while addressing a huge gathering of people in Srinagar.

Born on September 29, 1929, at Zurmanz, a village on the banks of the Wular Lake in Bandipora district, Geelani at a young age got associated with Jamaat-e-Islami. He started his political career under the tutelage of Maulana Mohammad Sayeed Masoodi, a senior National Conference (NC) leader. Geelani’s electoral career started from Sopore, a traditional separatist bastion where he first contested the Assembly elections in 1972. He represented Sopore in the erstwhile Jammu and Kashmir Assembly for three terms. The last term ended abruptly in 1987 when New Delhi engineered poll rigging 1987 as Muslim United Front (MUF) was winning majority seats but were declared losers. It triggered an armed insurgency in Kashmir against which continues to date. Even as a legislator Geelani would stress the resolution of the Kashmir issue.

Geelani’s politics has been defined by his demand for the right to self-determination as per the United Nations Resolutions and complete election boycott arguing that India has been using elections in J&K as a substitute for a referendum. He would often accuse the government of India of cultural aggression in J&K and attempt to change the demography of J&K. He would term engagement with the government of India as futile calling the engagement “talks for the sake of talks.” Geelani, however, would often appeal to the Western Institutions, international rights bodies, and the UN to intervene to end alleged human rights abuses in Kashmir and resolve the Kashmir dispute. There are instances where Geelani condemned political killings. He was also an advocate of the return of Kashmiri pandits to the Valley. He would call Kashmiri pandits part of the cultural milieu of the Valley.

In February this year when India and Pakistan reaffirmed the continuation of the 2003 ceasefire along the LoC, Geelani’s faction was the only one to oppose it. Abdullah Geelani, Geelani’s representative in Pakistan issued a strong statement criticizing the Pakistani government for renewing engagement with India. Geelani has been bedridden for years now and incommunicado for the last two years.

During the prolonged uprising in Kashmir, people would turn to Geelani and he was all ears listening to business leaders and others. Geelani was known for giving shutdown calls during the uprisings. However, it was his intervention that would end the strikes. He was controversial and popular because of his politics. Many hardliners within the Hurriyat would consider him being soft in his politics while the moderates were calling him a hardliner. Geelani’s deputy Mohammad Ashraf Sehari died in custody on May 15. Like Geelani, the government imposed strict restrictions and didn’t allow anyone to participate in the Sehari’s funeral. Analysts here say with Geelani’s death separatism will go faceless and underground and it will dangerous proposition as despite Geelani having a hardliner image he was always predicable in his politics. And in case there will be an uprising and large-scale street protests in Kashmir there will be no one to control it in the absence of Geelani.

Geelani has died two years after the revocation of Article 370 and in these two years, separatists have fallen silent. Geelani’s death has come at a time when analysts fear a possible spillover of Afghanistan into Jammu and Kashmir. Remember, Geelani was the only leader in Jammu and Kashmir who offered funeral prayer in absentia to Al-Qaida leader Osama bin Laden and the government allowed this to happen.

Geelani had set certain benchmarks for Kashmiri separatist politics and will be known as a leader who didn’t compromise and agreed to the dialogue. Geelani has left a huge body of writings and a large group of committed followers. With Geelani’s death, the baton of his politics hasn’t passed to anyone but to the new generation of Kashmiris. Only time will tell whether future separatist politics would evolve in Kashmir after Geelani’s death or it will go leaderless and faceless.

Geelani was first time arrested on August 28, 1962, and lodged in Central jail for questioning the accession and advocating the resolution of Kashmir. Since then he has spent a large part of his life in different jails. He died while being in house arrest for the past one decade.
As a mass leader, Geelani has been often compared to legendry kashmiri leader Sheikh Mohammad Abdullah, also called the ‘Lion of Kashmir. However, post 1990 the government had to guard Sheikh’s grave fearing it would be desecrated. At the same time Geelani was the only leader who post 1990 matched Sheikh’s popularity in Kashmir Valley. On his death, many say Kashmiri separatist movement has been orphaned. And most of the people will agree with it.