As a Rhodes Scholar, Girish Karnad completed his Masters from Oxford in Economics, Philosophy and Politics. 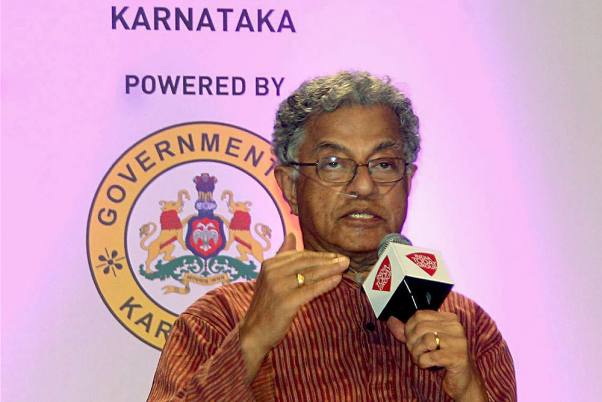 Paravasu: … As though one defined human beings by their begging – I despise it. I went because the fire sacrifice is a formal rite. Structured. It involves no emotional acrobatics from the participants. The process itself will bring Indra to me. And if anything goes wrong, there’s nothing the gods can do about it. It has to be set right by a man. By me. That’s why when the moment comes I shall confront Indra in silence. As an equal. For that, it is essential that one shed all human weaknesses. Be alone. Absolutely on one’s own to face that moment. Become a diamond. Unscratchable.

Paravasu: At least for that moment, yes.

Girish Karnad: The Myths Within Myths

Vishakha: And for that you must break all the rules?

Paravasu: To say “all” is to make a rule.

…. (From the Fire and the Rain, based on a little known myth from the Mahabharata, about a seven-year-long fire sacrifice for getting rains. It was commissioned by Guthrie Theatre in Minneapolis, USA)

Everyone - writer, theatre person or those in cinema and citizens of Bangalore - will have a memory of lasting impact from some of Girish Karnad’s writing or speeches or interaction. It could be his most defining "Tughlaq" or "Hayavadana", it could be his contemporary and relatively lighter plays such as the "Wedding Album" or "Boiled Beans on Toast" or even his turn as the RAW chief in Ek Tha Tiger or manipulative coach in Iqbal or the patriarchal husband to Smita Patil in iconic Umbartha or director of scintillating Utsav, as the science man in Turning Point or a fierce vocal citizen protesting against murders of journalist Gauri Lankesh and Professor Kalburgi. The list is truly endless.

Born in Maharashtra in 1938, Karnad grew up in Karnataka. He acted in Marathi and Hindi and wrote in Kannada. As a Rhodes Scholar, he completed his Masters from Oxford in Economics, Philosophy and Politics. He had written Yayati while studying and soon Tughlaq followed, both written in his twenties. Though seemingly historical, his plays resonated and commented on contemporary society. In 2018, his last play, Rakhsasa Tangadi, about the battle of Talikota between Vijaynagar empire and Deccan Sultanate was published. Others plays include Nagamandala, Agni Mattu Male (The Fire and The Rain).

While writing these plays, he continued to work in cinema – Kannada and Hindi. His first Kannada film Samsara, based on a novel by UR Ananthamurthy, won the first President's Golden Lotus Award for Kannada cinema. He was awarded Padmashri (1974), Padma Bhushan and the highest literary prize Jnanpith in 1999. He worked as the Director of Film and Television Institute of India, Pune, Chairman of Sangeet Natak Akademi and Director of the Nehru Centre in London.

His friends and contemporaries remember him as someone who was forthright, extremely sharp and wore his many talents lightly. One may well remember his verbal attack on VS Naipaul at the Tata Literature Festival. He remained vocal and articulate about issues. Last year, he attended the one year memorial for Gauri Lankesh wearing a placard saying "Me Too Urban Naxal" to protest against the arrest of activists after the Bhima Koregaon violence.

Lillette Dubey, actor-director who has directed Karnad’s "Wedding Album" and "Boiled Beans on Toast," says she admired Girish Karnad in her twenties. “What was not to like. He was so talented, had a wonderful voice, he wrote so well and was so articulate. I felt he was erudite and attractive in many ways. Incidentally, we met only about 15 years ago and I feel the most outstanding feature for me was his passion for theatre. We shared the same fire and passion for theatre and he was collaborative and very open. He liked and respected my work because we used to look for Indian writers in English and it was not easy in the initial years. Though some critics found his work as a departure from his historical plays, I think his recent work also has all the intelligence, observation, insight and sharp understanding of contemporary society and a tongue in cheek comment on its ways. He was really the last few bastions of theatre.”

And as everyone tries to hold on to different unforgettable glimpses of Girish Karnad, his huge contribution to literature, theatre and cinema, his courage to stand up for his beliefs and to articulate it impeccably will be enough and more for generations to be inspired and pursue brilliance.