Mamata Banerjee announced the TMC's candidate list for all the 42 seats of the state on Tuesday, dropping 10 sitting party lawmakers and bringing in a couple of popular Bengali film stars. 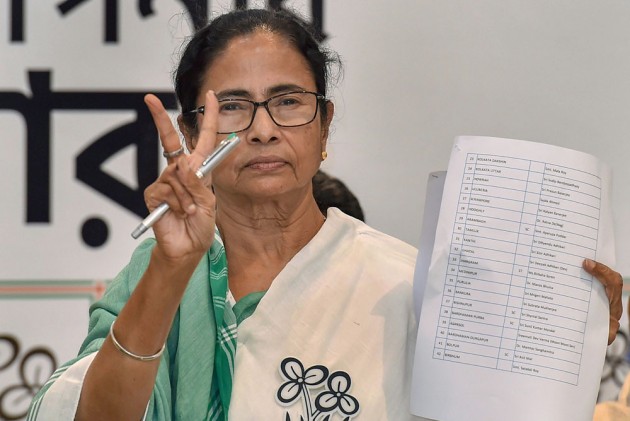 A host of popular Tollywood film stars have figured in the Trinamool Congress' (TMC) first list of candidates for the Lok Sabha elections, announced on Tuesday by the party chief and West Bengal Chief Minister Mamata Banerjee.

Banerjee announced the party's candidate list for all the 42 seats of the state, dropping 10 sitting party lawmakers and bringing in a couple of popular Bengali film stars.

To take on the BJP celebrity candidate and sitting lawmaker from Asansol Babul Supriyo, Banerjee has pitted veteran actress yesteryear Bengali heartthrob Moon Moon Sen, who, in 2014 had successfully contested from the Bankura Lok Sabha seat.

Reigning Tollywood superstar Dev will contest from his own seat, Ghatal.

Banerjee's obsession with fielding celebrities as candidates is not new, say political analysts in the state.

Over the years, Banerjee has picked film stars both yesteryear, including veteran as well as reigning cine stars for national as well as assembly polls, says journalist and political analyst Dipankar Dasgupta.

“There are a number of TMC legislators and lawmakers who are not hardcore politicians, but most of the imports from the glamour world,” he says.

“So, seeing glamorous film stars like Nusrat Jahan, Mimi Chakraborty, who have a huge fan following and are successful commercials film stars may help the party," Dasgupta says.

“One is, bury the internal squabbles of the party and keep factionalism at bay, which of late has been plaguing the party,” Sengupta says.

Banerjee herself had won her first parliamentary election from Jadavpur as a Congress candidate in 1984 defeating a heavyweight opponent in late Somnath Chatterjee.

“And now with sitting MP from Jadavpur Sugata Bose not being able contest because he didn't get permission from Harvard University, where he is a professor, Mamata's best bet was to field a popular young actress from the prestigious constituency as there would be many other hardcore leaders who would lay a claim to contest from the seat.”

Another key reason why Banerjee strategises selection of glamour candidates is that choosing a local face could widen the rift in the organisation, says a senior TMC leader, who does not wish to be named.

“To settle for a celebrity becomes easier for the top leadership for it makes it attractive for the common people to choose their leader besides pushing the rift under the carpet,” the leader says.

Just like most Bengalis, Banerjee, who herself regularly watches Bengali TV serials and films on YouTube every day after work, has another reason to opt for celebrity candidates: they glamorous never question the parties leadership or policies—which is a huge political advantage, says Sengupta.