Harsh Vardhan Shringla said the pandemic has uncovered the vulnerabilities of nations and reinforced the need to retain "strategic autonomy". 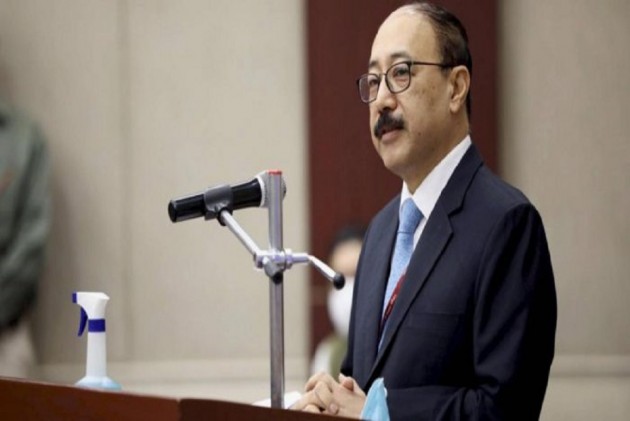 The global economic fallout of the coronavirus pandemic will continue to remain a challenge and India has been looking at it not as constraints but as an opportunity for its economy as well as a rebalancing of the international system, Foreign Secretary Harsh Vardhan Shringla said on Thursday.

In an address at a virtual seminar, Shringla also said India is committed to working for a rules-based international order underpinned by rule of law, transparency, freedom of navigation, respect for territorial integrity and sovereignty, and peaceful resolution of disputes.

The comments came in the backdrop of China's growing expansionist behaviour in eastern Ladakh, the South China Sea and Indo-Pacific region.

"Our objective remains advancing the security and economic interests of all countries," he said at the seminar organised by the National Defence College.

Shringla said India has developed a unique way of sharing its developmental experiences with its partners that has projected the country's strategic intentions to be a "force for good" in multiple geographies across the globe.

"The global economic fallout of the pandemic will continue to remain a challenge for us in times to come as we saw during the 2008 economic recession. The setback of this magnitude requires a carefully deliberated approach," he said.

The foreign secretary also highlighted how India has been dealing with the pandemic with a proactive response.

"The breakdown of the global supply chains has, perhaps, for the first time led us to think and explore alternative possibilities. India's view has been to look at the challenge not as constraints but as an opportunity for our economy as well as rebalancing the international system," he said.

Shringla said the pandemic has uncovered the vulnerabilities of nations and reinforced the need to retain "strategic autonomy".

"UN Security Council dynamics have changed considerably in the last decade. As a rule-abiding democracy and positive contributor to the security of global commons, India aims to bring innovative and inclusive solutions to foster development," he said.

Talking about evolving geopolitical scenario, Shringla said India's role in its extended neighbourhood in recent years has been that of a "net security provider".

At the same time, he added that net security does not have to be seen in the context of hard security.

"Net security also means cooperation with our neighbours in the Indo-Pacific region on maritime security, anti-piracy, maritime surveillance and responding to marine pollution etc.," he said.