A known fugitive, 50-year-old Azhar, who formed the JeM in 2000, was branded the brain behind various suicide strikes in India and known to have finetuned terror tactics which included survey of potential targets before carrying out the attack. 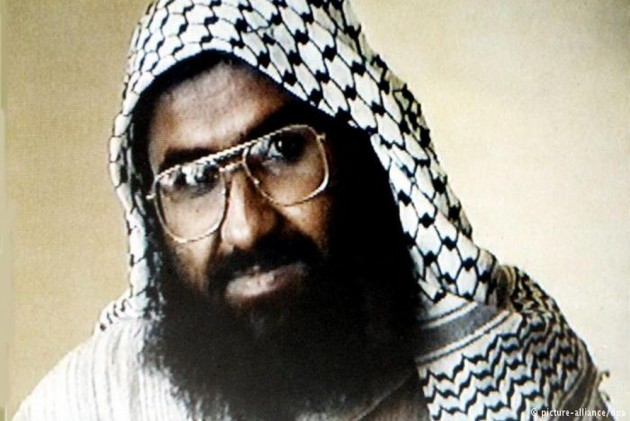 Jaish-e-Mohammed chief Masood Azhar, designated as a global terrorist by the United Nations, is a blue-eyed boy of Pakistan's spy agency ISI which masterminded several audacious attacks on India including the 2001 Parliament strike and the recent Pulwama carnage in February that pushed the two countries to the brink of war.

A known fugitive, 50-year-old Azhar, who formed the JeM in 2000, was branded the brain behind various suicide strikes in India and known to have finetuned terror tactics which included survey of potential targets before carrying out the attack.

The proposal to designate Azhar under the 1267 Al Qaeda Sanctions Committee of the UN Security Council was moved by France, UK and the US on February 27.

The proposal was the fourth attempt at the UN in the last 10 years to list Azhar as a global terrorist.

A UNSC designation will subject Azhar to an assets freeze, travel ban and an arms embargo. An assets freeze under the Sanctions Committee requires that all states freeze without delay the funds and other financial assets or economic resources of designated individuals and entities.

Azhar's terror academy in Balakot faced a blitzkrieg from Indian Air Force jets early hours of February 26 after the Pulwama attack on February 14 in which 40 CRPF personnel were killed.

For two decades after his release in exchange for passengers of a hijacked Indian Airlines plane in 1999, Azhar has since been the darling of Pakistan's external snooping agency Inter-Services Intelligence (ISI).

After the release of Azhar by India on December 31, 1999, his newly acquired stature in jehadi circles in Pakistan came in handy for the ISI who convinced clerics at the Binori mosque in Karachi to accept Azhar’s leadership and thus, on January 31, 2000, the JeM was born.

But despite earning a reputation of being a "manufacturer of suicide attackers", Azhar was not a hard nut to crack when he was in the custody of Indian forces, according to officials.

A former police officer, who interrogated Azhar after his arrest in 1994, said he got shaken up on the first "slap" from an army jawan, prompting him to blurt out details of not only his movements but also of other terror groups operating from Pakistan.

Azhar was arrested in Anantnag in South Kashmir in February 1994 after he had entered into India on a Portuguese passport through Bangladesh. It was a chance arrest. He along with Sajjad Afghani were travelling in an auto when it was stopped by armymen at Khanabal.

"Both ran from the autorickshaw prompting the army men to nab them. Army men were happy to find Sajjad Afghani and had a little knowledge about the other," former Director General of Sikkim Police Avinash Mohananey, who interrogated Azhar many times during his two-decade tenure in the Intelligence Bureau, told PTI.

The son of a retired school headmaster from Bhawalpur in Pakistan, Azhar always felt his custody in India was going to be short-lived and that attempts would be made for his release.

Attempts were indeed made - the first one within 10 months of his arrest when some foreigners were kidnapped from Delhi and the captors demanded his release. The plot failed when the Uttar Pradesh and Delhi Police managed to get the hostages freed from captivity in Sahranpur.

During that raid on Saharanpur raid, police arrested another militant, Omar Sheikh, who would eventually be released along with Azhar in exchange for the passengers of the 1999 hijacked flight IC814. Sheikh late became well known after he beheaded Wall Street Journal reporter Daniel Pearl in Pakistan.

Another attempt to release him was made by a shadow group of Harkat-ul-Ansar, Al-Faran, which demanded his release in exchange of five foreigners kidnapped in Kashmir in July 1995.

A tunnel was dug in Kot Balwal jail in 1999 for his escape but Azhar could not move out because of his unusual body structure - he was overweight and had large belly that was too big to be squeezed through the tunnel. However, in the process, Sajjad Afghani was killed.

Finally, he was released by the BJP-led NDA government in 1999, along with Omar Sheikh and Mushtaq Ahmed Zargar alias 'Latram', in exchange of the passengers of the hijacked flight IC-814.

The Kathmandu-New Delhi plane was hijacked and taken to Kandahar in Afghanistan by Azhar's men.

After the negotiations with hijackers failed, the government succumbed to their demands and the then external affairs minister Jaswant Singh took the three terrorists to Kandahar in a special plane to ensure the safe release of passengers of the hijacked plane.

Thus began a new chapter of terror in Jammu and Kashmir as well as rest of India.

After his release in 1999, Azhar formed the Jaish-e-Mohammed (JeM) and scripted many audacious terror strikes in India.

JeM announced its arrival in the Kashmir Valley in 2000 by carrying out a suicide car bombing attack at the gate of Badamibagh cantonment in Srinagar, the headquarters of the Army's 15 Corps. Two armymen were killed in the attack.

Later, it was involved in the attack on Parliament, the Pathankot air force base, army camps in Jammu and Uri, and the latest suicide attack on CRPF in Pulwama which claimed the lives of 40 personnel.