Goa Polls: TMC, AAP Banking On Anti-Incumbency Against BJP And Lack Of Trust In Congress

Goa has a history of horse-trading, defections and the President’s rule. With so many parties vying for the 40 assembly seats, it will be a tough calling for all those in the political arena. 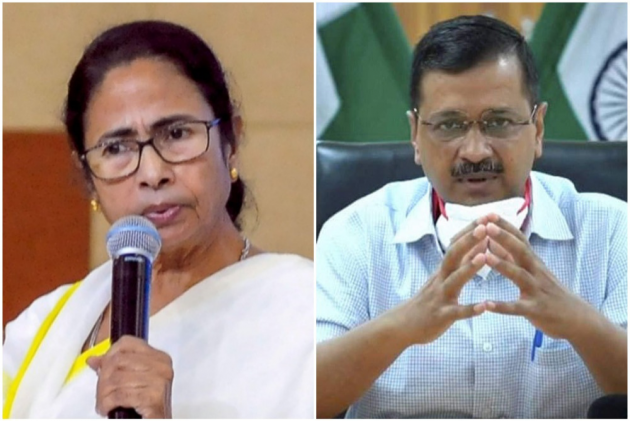 It is like the chase for the proverbial gold pot at the end of the rainbow. Eight national political parties and an equal number of regional parties are on the chase for power in Goa. This is an unprecedented chase for the 40 assembly seats in one of the smallest states in the country. This is the first time so many national leaders have visited the state to campaign for their parties even before the elections are announced. Goa is slated to go to polls some time in 2022.

The biggies of Indian politics have started frequenting Goa playing Santa Claus to the masses. Permanent offices have been set up and solutions to the problems of the state are being read out at rallies. The competitors to the ruling party, the BJP, have intensified their political campaigns and the shrill cacophony resonates around Goa. Mamata Banerjee, Rahul Gandhi, Amit Shah, J P Nadda, Arvind Kejriwal, P Chidambaram and Devendra Fadnavis have not only addressed rallies but have taken part in other activities organised by the local divisions of their respective parties in recent weeks.

Goa politics has always been centred more on individuals rather than the political parties. The first chief minister of the state belonged to a regional party – the Maharashtra Gomantak Party. The national parties had a tough time establishing their foothold in the state. It was rectified in later decades. After Bandodkar, his daughter Shashikala Kakodkar – the state’s only woman CM – and Manohar Parrikar developed into cult figures who were larger than the parties they represented. Presently, the national parties lack strong and charismatic leaders in Goa, so given the 2022 Assembly polls there will be too much riding on the regional satraps.

Goa has a history of horse trading, defections and President’s rule. With so many parties vying for the 40 assembly seats, it will be a tough calling for all those in the political arena. Goa’s economy is largely dependent on tourism and mining – two sectors that elevate the state to a status that no political party will ignore.

Since the size of each assembly constituency is small, in the multi-party contests, the victory margins will be small. Therefore, ideology may not often work as elections seem to be more individual-centric than party-centric, said sources. Statistics indicate that more seats were won by the local political parties and independent candidates in the 2017 assembly polls.

The TMC and the AAP are banking on the huge anti-incumbency factor faced by the BJP and the trust deficit faced by the Congress Party. Both these parties have made a very noisy entry into the big fight in the state. “The people want the BJP to go. They do not trust the Congress after it handed over the people’s mandate given to them to the BJP,” said Saket Gokhale, national spokesman for the TMC. The TMC’s election strategy is being handled by Prashant Kishore. “We are here to stay. The TMC will be a permanent fixture in Goa and not some fly by night operators,” said Gokhale.

Congress leader Chidambaram has parked himself in the state and has held a series of meetings with the party workers and leaders. Defections have hit Congress hard, therefore it is more likely that a younger crop of leaders will contest the Congress seats. “We have to do a lot of work and our party workers need a strong dose of morale boosters. We cannot disregard the presence of the TMC and AAP in Goa,” said a former Congress chief minister to Outlook.
This leader further said that the leadership crisis of the Congress Party could impact the party’s prospects.

During his visit to the state, Delhi CM Kejriwal (AAP) promised jobs for Goans and not just for the relatives of the MLAs, one job for every unemployed family and Rs 3000 for the family until then, 80 per cent of the private jobs will be reserved for Goans, Rs 5000 per month for those unemployed in the tourism sector due to Covid-19, Rs 5000 per month for those affected by the ban on mining in the state and the setting up of a Skill University in the state. AAP is also offering “electricity guarantee” and an employment guarantee.

Kejriwal had also announced that if AAP came to power the party will arrange for free darshan of Lord Ram in Ayodhya, Christian “brothers and sisters” will be taken to Velankanni, while the Muslims will get a free trip to Ajmer Sharif. Free trips will also be arranged to Shirdi for those who have faith in Sai Baba, Kejriwal had said in early November when he had visted the state.
Gokhale is confident that the TMC is offering solutions that the other political parties have been unable to push. “TMC is filling a vacuum created due to the lack of strong political opponents to the BJP. People want change. Mamata Didi has a concrete solution-oriented approach. Our intention has never been to parachute from the outside,” said Gokhale.

Calling the crowding by national leaders as “surreal” a Panjim-based writer says it has become a free for all in the state. “Goa represents the aspirational Indian. People here are educated and wealthy. Besides the bar to entry in Goa is low. Losing Goa will prove costly for the main players – the Congress and the BJP,” said the writer.

Speaking to Outlook, Ponda-based Benedict D’Lima says that the mess made by all the political parties needs to be cleared up. “They have ruined the state. We have a major drugs issue. There is a free flow of alcohol and alcoholics in the state. The youth are wasting away. There is corruption everywhere. It may just be President’s rule again,” said D’Lima.

Promises have been made. Only time will tell whether these will be delivered. Meanwhile, as the elections approach the political shrill will only grow louder drowning the voices of those who need those promises kept.