Sacrilege | What Is It And What Are The Laws Around It

Three back-to-back incidents in Punjab have once again stirred the long-simmering controversy around what usually defines sacrilege. 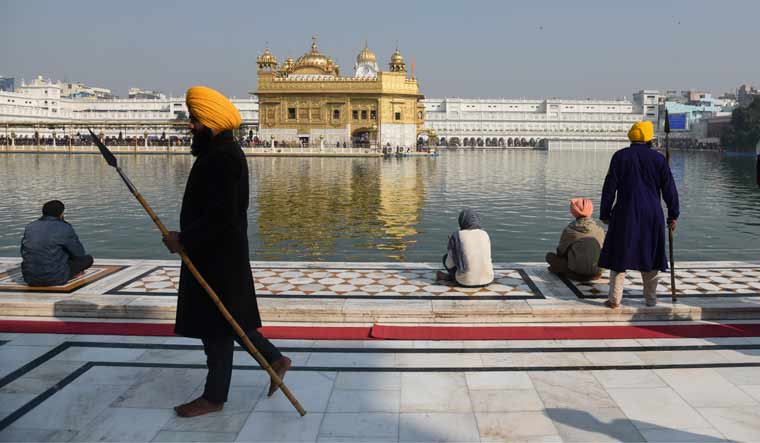 Three back-to-back incidents of attempted 'sacrilege' in Punjab has once again stirred the long-simmering controversy around what usually defines sacrilege.

A day after a man was beaten to death for an alleged sacrilege bid at the Golden Temple in Amritsar on Saturday, the death of another person by a similar cause was reported. The man in the second incident was accused of disregarding the Sikh religious flag 'Nishan Sahib' at a gurdwara on Sunday morning. Both incidents led to the lynching of the two accused 'within a span of 24 hours.

As the Punjab Assembly elections of 2022 draw near, the ruling Congress has found itself in a tight spot following the sacrilege issue and lynching.

What are the three recent incidents?

On Saturday, a man jumped over the railings of the sanctum sanctorum of the Golen Temple, Amritsar, picked up the ceremonial sword and reached near a place where a Sikh priest was reciting the holy Guru Granth Sahib. He was caught by Shiromani Gurdwara Parbandhak Committee (SGPC) task force members. When he was being taken to the SGPC office, the angry "sangat" (congregation) thrashed him badly, which subsequently led to his death. The incident and the lynching of the man has now created a political stir in the poll-bound state.

I never thought anyone would dare to do something like this inside Darbar Sahib. Punjab Police did nothing (after alleged sacrilege bid at Golden Temple); govt's been playing with our sentiments for 2yrs now: Shiromani Akali Dal Pres Sukhbir Singh Badal at Golden Temple, Amritsar pic.twitter.com/rnXU8yxI3z

The incident was condemned by leaders across the political spectrum. Punjab Chief Minister Charanjit Sigh Channi termed the act "heinous and most unfortunate" and ordered a thorough probe into the matter.

CM @CharanjitChanni strongly condemned the most unfortunate and heinous act to attempt sacrilege of Sri Guru Granth Sahib in the sanctum sanctorum of Sri Harimandir Sahib during the path of Sri Rehras Sahib.
(1/3)

Following the incident at the Golden Temple, another man on Sunday morning attempted alleged 'sacrilege' by trying to remove the sacred flag, Nishan Sahib, from atop a gurdwara in Kapurthala district, Punjab. The incident took place in the village of Nizampur where the man was caught and beaten to death inside a room by a gang of youth. However, later the police clarified that it was not 'sacrilege' but an attempt 'to steal'.

Residents of village Nijampur, dist. Kapurthala catch a person from village gurdwara who they allege was seen at gurdwara at around 4 AM and was disrespecting Nishan Sahib (Sikh flag) and when they spotted him the suspect tried to escape but

Last week, another man was apprehended inside the Golden Temple for throwing the 'Gutka Sahib' (smaller version of the Sikh holy book) into the shrine lake. The man was caught by the Shiromani Gurdwara Parbandhak Committee (SGPC) members and sent to jail.

What is 'beadbi' or 'sacrilege' in Sikhism?

Speaking to Outlook earlier, Harjinder Singh Dhami, President of SGPC said that 'Beadbi' meant being disrespectful towards Guru Granth Sahib Ji. "It can be interpreted in so many ways, ‘beadbi’ is an insult to the Gurus, Sri Dhan Guru Granth Sahib Ji Maharaj," he said, adding, "For instance, when you enter the premises where Guru Granth Sahib Ji or any part of it is kept you have to follow certain rules like covering your head, not wearing shoes, one should be clean, not be under influence of alcohol, should not have smoked or consumed non-vegetarian food. One always needs to wash hands, face and feet before touching Guru Granth Sahib Ji. Even the wrong pronunciation of Gurbani is regarded as beadbi."

A few past incidents of sacrilege

In June earlier this year, a man in Haryana’s Kaithal district was booked for allegedly desecrating the Bir (a physical copy of the holy book) of Guru Granth Sahib at a gurudwara in Paharpur village. During the course of the investigation, CCTV footage revealed that the man had entered the Gurudwara carrying a stick and wearing his shoes. He then lifted the sword kept in front of the palanquin and then kept it back. Further, he threw away the ‘Chaur Sahib’ (the whisk waved over the Granth) and ran away from the gurudwara. Following the sacrilege, the man was identified and a police case was registered against him.

Lakhbir Singh, Dalit labour, was lynched, his hand chopped off and the body tied to a metal barricade at a farmers' protest venue at Kundli near the Delhi-Haryana border on October 15. The killing was carried out by a group of Nihangs. In a video clip that had gone viral on social media platforms, some Nihangs were seen standing as the man lied on the ground in a pool of blood with his chopped off left hand lying next to him. The Nihangs claimed responsibility for the attack and said that it was a punishment for disrespecting the holy scripture Sarbloh Granth (sacred text of the Sikhs). The Nihangs later claimed that the government had consistently failed to protect Sikhism from the numerous cases of sacrilege in the past, and hence, they took the law to their own hands to punish the man for committing the "ultimate act of crime".

What a mockery of law in INDIA, this man was killed as punishment and is dead & gone. What is this case all about now?

Sacrilege of Guru Granth Sahib has become a political tool. People have been losing lives. Nihang Singhs murdered a man on Singhu border on the name of same issue and there was no legal action. In Kapurthala, a person was killed for same reason

Dara Sacha Saud chief Ram Rahim Gurmeet was questioned for the first time in November, early this year, in a sacrilege case dating back to 2015. The Dera head has been accused of theft of the Bir of Guru Granth Sahib from a gurdwara at Burj Jawahar Singh Wala village on June 1, 2015. The self-styled godman has also been convicted of rape and murder.

#SupremeCourt has dismissed a plea seeking transfer of sacrilege cases outside of Punjab.
Eight members of the Dera Sacha Sauda were charged with sacrilege for allegedly tearing Guru Granth Sahib and throwing papers on the ground.

What does the law say?

In 2016, under the pressure of Congress, the then SAD-BJP government brought in a Bill to amend laws of the Indian Penal Code (IPC) and the Code of Criminal Procedure (CrPC) to deal with sacrilege crime in Punjab.

The amended laws sought to make any sacrilege of the Guru Granth Sahib punishable by law with life imprisonment. However, it received a backlash from the Centre for excluding other religions.

When Congress came to power, Captain Amarinder Singh set up the Justice Ranjit Singh Commission to investigate the sacrilege incidents of the Guru Granth Sahib along with other religious texts.

With the Commission's recommendations, the amended law was extended to cover all religions.

The amendments led to the insertion of Section 295AA (Punjab-specific) into the IPC that states “whoever causes injury, damage or sacrilege to Sri Guru Granth Sahib, Srimad Bhagwad Geeta, Holy Quran and Holy Bible with the intention to hurt the religious feelings of the people, shall be punished with imprisonment for life”.

What does the data say?

For the past couple of years, Punjab has consistently topped the chart of the highest number of sacrilege cases. The National Crime Bureau (NCB) data between 2018 and 2020 shows that the number of crimes reported in Punjab under Sections 295 to 297, that deal with sacrilege cases, have been the highest.