The delegation will meet Home Minister Amit Shah and party working President JP Nadda later in the day and is expected to discuss the future course of action to form the government in Karnataka. 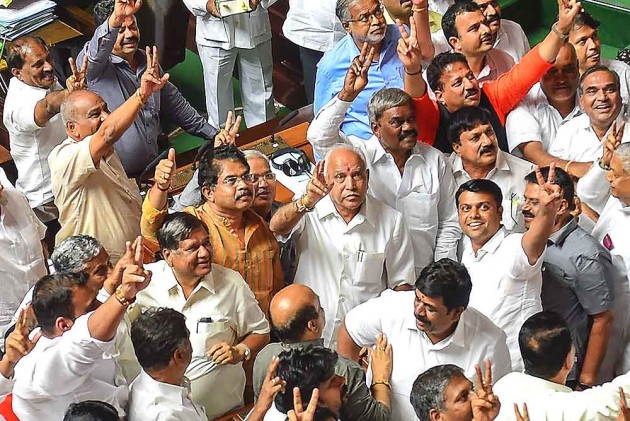 A Karnataka BJP spokesperson on Thursday said the Governor may recommend President's rule in the state till the time Speaker KR Ramesh Kumar takes a decision on the disqualification of rebel Congress-JD(S) MLAs who defied party whip during the trust vote.

"If the Speaker takes longer time to accept or reject the resignations of the rebels, the Governor (Vajubhai Vala) may recommend President's rule in the state, as we would not like to stake claim to power in such a situation," BJP's state spokesman G. Madhusudan told IANS.

Days After Govt's Fall In Karnataka, Congress-JD(S) Non-Committal On Future Of Alliance

The delegation will meet Shah and Nadda later in the day and is expected to discuss the future course of action to form the government in Karnataka.

The Congress-JD(S) government in Karnataka lost the trust vote on July 23.

Jagadish Shettar said the delegation was in the national capital to chart out the future strategy for Karnataka.

"We are meeting the BJP leaders to take their advice on how to go further," Arvind Limbavali said.