The talks between the government and the protesting unions began at the Vigyan Bhawan in Delhi around 2.30 pm. 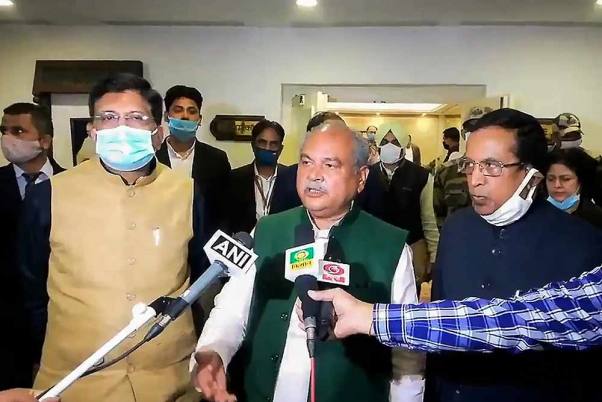 Union Agriculture Minister Narendra Singh Tomar on Saturday told farmer unions protesting against the new agriculture laws that the government is committed to cordial talks, according to sources.

In his introductory remarks at the fifth round of meeting with 40 farmers' groups, he also welcomed feedback on the new farm laws, they said.

The talks between the government and the protesting unions began at the Vigyan Bhawan here around 2.30 pm.

Farmers’ Protest Enters Day 10, Fifth Round Of Talks On With Centre

Three central ministers, including Tomar, are currently holding talks with representatives of the unions.

Railway, Commerce and Food Minister Piyush Goyal and Minister of State for Commerce Som Parkash, who is an MP from Punjab, are also present in the meeting.

In his opening remarks, Tomar, who is leading the talks for the Centre, said the government is committed to "cordial" talks with farmers' leaders and does not intend to hurt farmers' sentiments, sources said.

The agriculture minister welcomed feedback on the three farm laws, they said and added that the agriculture secretary, Sanjay Agarwal, summarised the proceedings of the previous rounds of talks with farmer unions.

Both the sides are currently discussing contentious issues like provision of dispute resolution and registration of traders in proposed private mandis under the new laws, the sources said.

On Thursday, talks between the Union ministers and a representative group of thousands of agitating farmers failed to yield any resolution, as the union leaders stuck to their demand for the repeal of new farm laws.