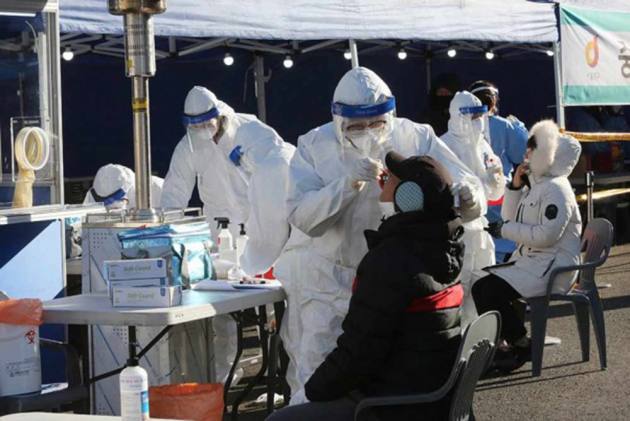 All passengers arriving from the UK via transit flights will have to undergo RT-PCR tests and those found Covid-19 positive will be isolated at a separate institutional facility, stated the Health Ministry's standard operating procedure (SOP) issued on Tuesday in view of the new coronavirus variant detected in the UK.

India has suspended all passenger flights from the United Kingdom from Wednesday till December 31, in the wake of the emergence of a mutated strain of the virus there, joining several other countries that have imposed a similar flight ban.

The SOP issued by the Health Ministry for epidemiological surveillance describes the activities to be undertaken at airports for all flyers who have travelled from or transited through the UK from November 25 to December 23.

It stated that all travellers from the UK will be required to declare, according to existing procedure, their recent travel history and fill up the self-declaration form to be screened for Covid-19.

All passengers coming from the UK from December 21 to 23 would be subjected to the RT-PCR test on arrival. The tests will be conducted by respective state governments, the SOP stated. Those whose RT-PCR test return negative will be advised to quarantine themselves at home.

The passengers who are found positive shall be isolated at an institutional facility in a separate unit coordinated by the respective state health authorities. They would earmark specific facilities for such isolation and treatment, the SOP said.

A spike gene-based RT-PCR test should also be performed by an appropriate laboratory in case of a positive sample, the health ministry recommended.

Also, contacts of such travellers who were found Covid-19 positive during airport testing would be subjected to institutional quarantine and tested according to the guidelines issued by the Indian Council of Medical Research (ICMR).

"Necessary action to send the samples to the National Institute of Virology (NIV), Pune, or any other appropriate lab for genomic sequencing will be initiated at the facility level,” the statement read.

In case the report of the sequencing is consistent with the current SARS-CoV-2 virus genome circulating in the country, the ongoing treatment protocol including home isolation and treatment at facility level as per case severity may be followed, the SOP stated.

"If the genomic sequencing indicates the presence of a new variant of SARS-CoV-2, then the patient will continue to remain in a separate isolation unit. While necessary treatment as per the existing protocol will be given, the patient shall be tested on 14th day, after having tested positive in the initial test.

"In case the sample is found positive on the 14th day, further sample may be taken until his two consecutive samples taken 24 hours apart are tested negative," the guidelines stated.

It stated that state-wise passenger manifest of the flights from the UK landing at various airports in India for the past four weeks from November 25 to December 23 shall be conveyed by the Bureau of Immigration to the state government and Integrated Disease Surveillance Programme (IDSP) so that the data would be provided to the surveillance teams.

The list of passengers travelling between December 21 and 23, who are found RT-PCR negative at airport testing, shall be shared with the states by the Central unit of IDSP. They shall be advised to quarantine themselves at home and undergo tests as per ICMR guidelines. Their monitoring would be ensured by the state governments and IDSP.

Those travellers from the UK who arrived in India from November 25 to December 8 will be contacted by district surveillance officers advising them to self-monitor their health and in case of development of symptoms would undergo RT-PCR test.

The list of travellers who arrived in India between  December 9 and 23 will be shared with respective states and district surveillance officers for regular follow-up till 14 days after their arrival in India.

"The district surveillance officer has to ensure daily follow up of passengers under observation for 28 days starting from date of arrival," the SOP stated.

The new variant of the SARS-CoV 2 virus has been reported by the Government of United Kingdom to the World Health Organization. This variant is estimated by European Centre for Disease Control (ECDC) to be more transmissible and affecting younger population.

The new variant is said to be 70 per cent more transmissible, though health experts say there is no evidence that it is more deadly or would react differently to vaccines.