Grand Alliance A Club Of 'Rich Dynasties', They Are Not For People But For Power: Modi

The Prime Minister Narendra Modi said the top leaders of several parties who are now aiming for a seat in the 'Mahagathbandhan' were arrested and tortured during the Emergency. 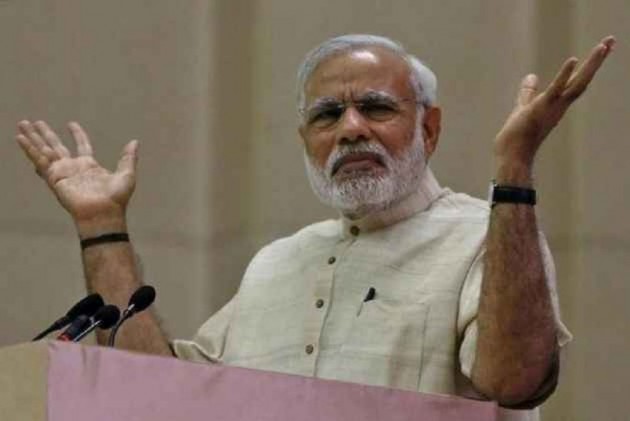 Calling the 'grand alliance' a club of "rich dynasties", Prime Minister Narendra Modi on Sunday said the efforts of the opposition parties were for personal survival and ambitions and the country would never accept such an incoherent coalition.

A Karyakarta from Tiruvallur wanted to know:

What has the Government done for senior citizens?

Ahead Of 2019 Battle, BJP In A Soul-Search Mode

Know what I told him. pic.twitter.com/wgi7RZPIei

Responding to a query, Modi spoke at length describing several instances where the Congress had insulted and deceived several key leaders from different political parties who are now talking about a 'grand alliance'.

"Several of these parties and their leaders claim to be inspired by Ram Manohar Lohia, who was deeply opposed to the Congress and its ideology and the way Congress did politics. What sort of tribute they are paying to Lohia by forming an unholy and opportunist alliance with Congress.

The Prime Minister said the top leaders of several parties who are now aiming for a seat in the 'Mahagathbandhan' were arrested and tortured during the Emergency.

"Sadly, today these parties and the Congress have become oxygen for each other. But people know very well the real nature of these parties. Whenever they get power, be it in Uttar Pradesh or in Bihar, there is a complete breakdown of law and order. Corrupt and criminal elements are supreme when these parties govern," he said.

Recalling how the Congress had harassed Samajwadi Party leader Mulayam Singh Yadav in disproportionate assets cases, he asked: "Have these parties done justice to the ideals of Lohia? The answer is a resounding no."

Hitting out at the opposition, Modi said the Congress and its ecosystem spared no one, including MGR (M.G. Ramachandran) and NTR (N.T. Ramarao).

"Even the great MGR, the stalwart who worked for the poor and the downtrodden, was targeted. In 1980, his elected government was dismissed. He had the support of the Assembly and the House of the People but the Congress had Raj Bhavan and the House of Governors. Fresh elections were held and MGR won. Indira Gandhi never forgave MGR for that," he said.

Recalling the Congress' stand on the Jain Commission, he said the Congress at that time had said that "either it is DMK or it is us", but today they want to be together.

"If not opportunism, what explains their alliance?" he said.

Modi said that even NTR faced the anger of the Congress and formed a party for the pride and respect of the Telugus after being humiliated by the Congress.

"Yet today the party of NTR wants to ally with Congress. How can the people of Andhra Pradesh accept this," he said in a direct reference to the Telugu Desam Party, led by Andhra Pradesh Chief Minister N. Chandrababu Naidu.

The Prime Minister also hit out at former Union Minister Sharad Pawar, saying that his Nationalist Congress Party (NCP) was formed in severe opposition to the Congress leadership but later it ruled Maharashtra for several years with the Congress.

"The truth is that these so called grand alliances are a club of rich dynasties, they are only to promote family rule. People can see through their opportunism and will never accept such an incoherent coalition," he said.

Responding to a question by a party worker, Modi asserted that elections are not won by leaders, they are won by the continuous efforts of the party workers who form the backbone of the BJP's political organisation.

"The more our karyakartas (party workers) are filled with respect and pride for our motherland, the more they are connected with the people, the more sensitive our karyakartas are towards the problems of the poor, the easier will be for us to emerge victorious," he said.

During the interaction, the Prime Minister also talked about several other issues such as the future growth of urban cities in India and the challenges and opportunities posed by them.

He listed how his government has taken rapid strides in fulfilling its vision of a new India through transformative schemes like Aayushman Bharat, Saubhagya Yojana and Swachh Bharat Abhiyan.