GSLV-F10/EOS-03 Mission Not Accomplished Due To Performance Anomaly: ISRO

The 51.70-metre tall rocket GSLV-F10/EOS-03 successfully lifted off from the second launch pad at the spaceport as planned at 05.43 hrs soon after the 26-hour countdown concluded. 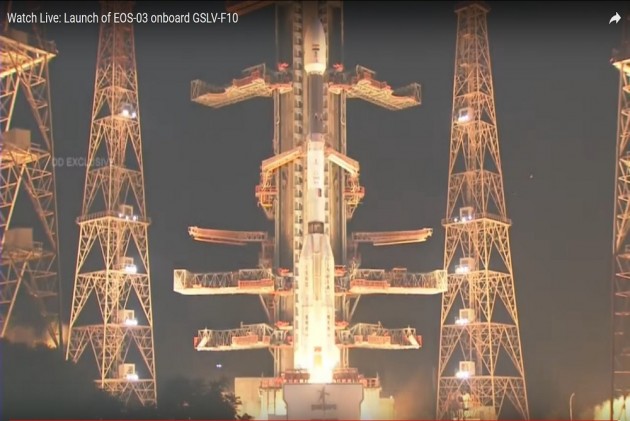 Indian Space Research Organisation on Thursday said that its second mission of the year to place an earth observation satellite by a GSLV rocket faced a setback as the mission could not be accomplished fully due to performance anomaly in the cryogenic stage of the rocket.

The  rocket GSLV-F10/EOS-03, which is 51.70-metre tall, successfully lifted off from the second launch pad at the spaceport as planned at 05.43 hrs. However, soon after the launch, the 26-hour countdown concluded.

Ahead of the lift-off, the Launch Authorisation Board cleared the decks for a normal lift-off as planned. The performance of the rocket in the first and second stages of the rocket was normal, scientists at the Mission Control Centre said.

However, minutes later the scientists were seen in discussion and it was announced in the Mission Control Centre by the Range Operations Director "mission could not be accomplished fully due to performance anomaly".

After the countdown commenced, scientists were engaged in the filling of propellants for the four-stage rocket at the Satish Dhawan Space Centre, Sriharikota about 100 kms from Chennai.
The objective of Thursday's mission was to provide near real-time imaging of large area regions at frequent intervals, for quick monitoring of natural disasters, episodic events and obtain spectral signatures for agriculture, forestry, water bodies as well as for disaster warning, cyclone monitoring, cloud burst and thunderstorm monitoring.
Before today's launch, ISRO had launched Brazil's earth observation satellite Amazonia-1 and 18 co-passenger satellites in February this year. Thursday's rocket launch was also planned to be held in April or May however, the outbreak pushed the scientists to resume it in August.