Modi cautions states, UTS against laxity in fighting the pandemic 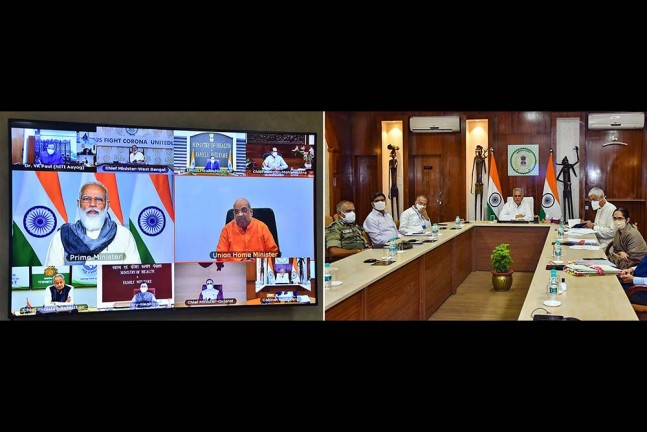 Prime Minister Narendra Modi on Tuesday cautioned states and Union Territories against any laxity in fighting the Covid-19 pandemic and called for reducing the positivity and fatality rates by focusing on curbing the virus transmission.

Interacting with chief ministers, the Prime Minister also called for more RT-PCR tests, even as he underlined that India's Covid-19 situation is more stable than other countries in terms of recovery and fatality rates.

Modi asked them to work towards bringing the positive rate to less than 5 per cent and the fatality rate to under 1 per cent and called for more RT-PCR tests.

"We need to speed up our efforts to reduce transmission of the virus. Testing, confirmation, contact tracing and data must be given top priority," he said.

A massive network of testing to treatment is running well in the entire country and it is being regularly widened, the Prime Minister said.

Modi has held several rounds of virtual meetings with states over the coronavirus situation so far.

While the national daily Covid-19 case count has remained below 50,000 for some time, several urban centres have witnessed a surge, resulting in enforcement of several measures, including curfews in some cities.

India saw 37,975 new coronavirus infections being reported in a day taking the country's Covid-19 caseload to 91.77 lakh, while the recoveries crossed 86 lakh, according to the Union Health Ministry data updated on Tuesday.