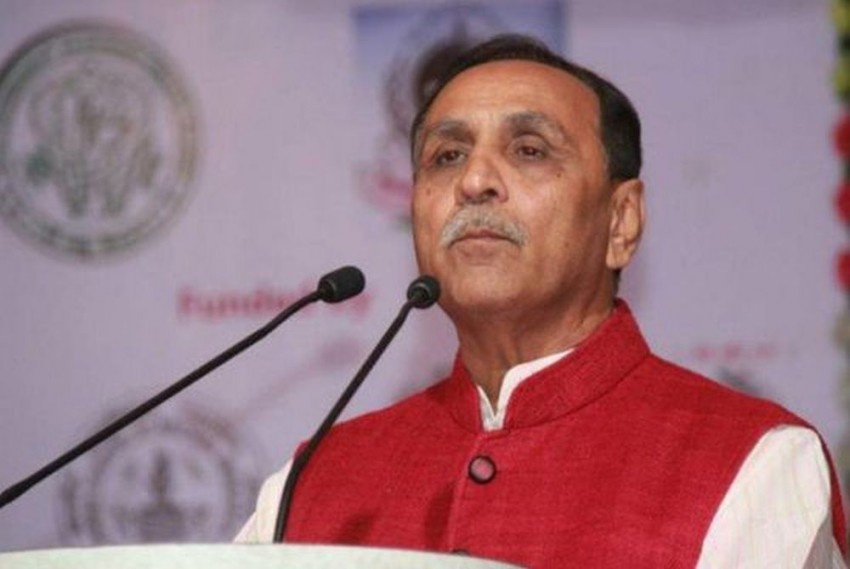 He had attended the virtual ceremony earlier in the morning when the PM had also performed the 'Bhumi pujan' ceremony of the Girls' Hostel under the Sardardham project phase two. Gujarat deputy chief minister Nitin Patel too was present at the ceremony. He is now the frontrunner to replace Rupani 15 months before the Assembly elections in the state.

When Rupala handed over his resignation to the Governor, Gujarat in-charge Bhupender Yadav was also present at Raj Bhavan along with other state leaders including newly anointed health minister Mansukh Mandaviya and Rajya Sabha MP Parshottam Rupala.
Sources in the BJP say that Yadav and general secretary (organisation) B.L. Santhosh have been meeting stakeholders in the state and the decision for a change of guard was not sudden.

“The centre had been watching Gujarat closely for the past few months. It was decided to cut our losses after ascertaining the public sentiment,” says a central party leader. The change at the helm in the poll-bound was imperative for a number of reasons including the caste factor and the discontent among the people over handling of the Covid-19 second wave.

The party had been unable to win over the Patidars, a politically powerful community in the state, which could swing the electoral outcome. “That is why Nitinbhai (Patel) may be the first choice to lead the party into the elections next year,” reveals a senior party leader. In fact, the party may just go in for two deputy chief ministers to balance the caste equations before they go into polls.

“Gujarat is a matter of prestige for the party. With both the PM and home minister Amit Shah hailing from the state, the party cannot afford to loosen its grip,” the leader adds. Even when Rupani had taken over as the CM replacing Anandiben Patel in 2016 – one year before the 2017 elections – a section of the party had questioned the wisdom of the decision. However, when the party won the 2017 elections, albeit with a considerably reduced margin, Rupani was named the CM. BJP’s tally had come down to 99 from the previous 115 of the total 182 seats.

Now, as the BJP is gearing up for elections in end-2022, it did not want to go with the incumbent chief minister. In addition to the caste factor – Rupani belongs to the Jain community – the second big reason to ease out Rupani is the state’s response to Covid-19. Just as the second wave was peaking in April, the High Court of Gujarat had questioned the state’s preparedness, and found it “not satisfactory and not transparent”.

Another BJP leader says that the decision to change the chief minister should not be seen as a verdict on Rupani’s competence and governance. “It just shows that as a party the BJP is responsive to people’s sentiments. And a new leader may be able to infuse some dynamism into the party cadre,” he says. According to him, the fact that three BJP-run states have changed chief ministers in the past few months – Uttarakhand, Karnataka and now Gujarat – shows that the party has its ear to the ground.

Following Vijay Rupani's sudden decision of stepping down as the chief minister of Gujarat,  names of Gujarat Deputy CM Nitin Patel, state agriculture minister R C Faldu and Union ministers Purshottam Rupala and Mansukh Mandaviya are doing rounds fuelling speculation over who will take over as the state's Chief Minister ahead of 2022 assembly polls.

Vijay Rupani stepped down from the designation of CM on Saturday, over a year ahead of Assembly elections in the state, without assigning any specific reason. Rupani who was sworn-in in December 2017 still had a year to go before the next state elections which are due in December 2022. Soon after Rupani's resignation, his entire cabinet resigned too.

"I have resigned as chief minister of Gujarat,” Rupani told reporters after meeting Governor Acharya Devvrat and submitting his resignation letter.

"I was allowed to serve the state for five years. I have contributed to the development of the state. I will further do whatever is asked by my party,” Rupani added.

“In BJP, there has been a tradition that responsibilities of party workers change from time to time. I will be ready to take whatever responsibility that the party will give me in the future,”

Addressing the press, Vijay Rupani thanked the BJP central leadership and Prime Minister Narendra Modi. "I believe that now this journey of the development of Gujarat should proceed under the leadership of the prime minister with new enthusiasm and new energy. Keeping this in mind, I am resigning from the responsibility of the chief minister of Gujarat."

"I want to thank BJP for giving me this opportunity to serve as Gujarat's CM. During my tenure, I got the opportunity to add to the development of the state under PM Modi's leadership." Vijay Rupani in Gandhinagar.

After BS Yediyurappa, Tirath Singh Rawat and Trivendra Rawat, Rupani becomes the fourth BJP Chief Minister who have stepped down in recent months.

Asked about reasons for his resignation, Rupani said, “In BJP, it is like a relay race for party workers. One gives the baton to the other.”

On who will be the next chief minister, Rupani said that the party will decide about it.
He denied that he had any differences with state BJP president C R Paatil.

Rupani comes from the Jain community which has around two per cent population in the state. There is speculation that his successor may be from the patidar community.

He first became the chief minister on August 7, 2016, following the resignation of incumbent Anandiben Patel, and continued in the office after the BJP's victory in the 2017 Assembly elections.

Rupani, who completed five years in office on August 7 this year, was present at the inauguration on Saturday of Sardardham Bhavan where Modi was present virtually.