Watch: PM Modi Takes A Ride In A Tank At L&T's Gun-Making Facility 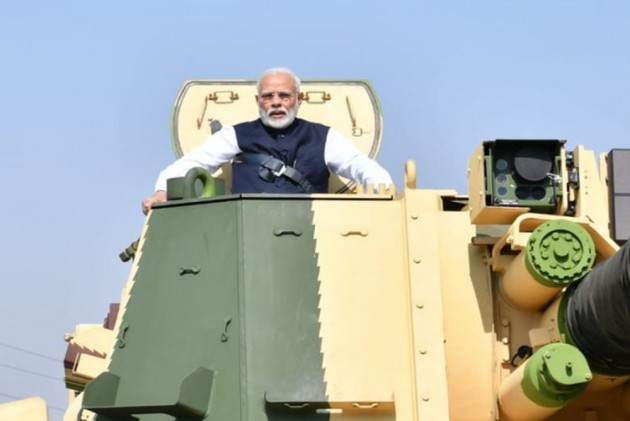 The prime minister shared a brief video of himself standing in a tank on his Twitter handle.

"Checking out the tanks at L&T's Armoured Systems Complex in Hazira," Modi said in the tweet.

Checking out the tanks at L&T’s Armoured Systems Complex in Hazira. pic.twitter.com/zf7wRrbX7Y

The Armoured Systems Complex, which Modi inaugurated earlier in the day, will be the first private facility in the country where the K9 Vajra self-propelled Howitzer guns will be manufactured.

I congratulate the entire team of Larsen & Toubro for building the state-of-the-art K-9 Vajra Self Propelled Howitzer.

This is a significant contribution towards India’s defence sector and protecting the country. pic.twitter.com/9YLRjHYdFE

The company has set up the Armoured Systems Complex at Hazira, around 30 kilometres from Surat, to manufacture and integrate advanced armoured platforms, such as self-propelled artillery Howitzers, future infantry combat vehicles, future-ready combat vehicles and future main battle tanks.

Had the privilege of inaugurating the Larsen and Toubro Armoured Systems Complex in Hazira, Gujarat.

Boosting ‘Make in India’ in the defence sector is our endeavour. I am glad that the private sector too is supporting this pursuit and making a valuable contribution. pic.twitter.com/2zJynr5aCw