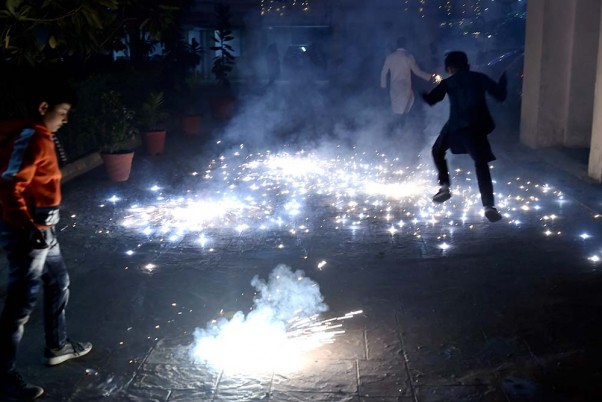 A total of 25 burn cases were reported in different districts of Gujarat on Diwali night, the Emergency Management and Research Institute (EMRI) said on Sunday.

Laxmi Pujan, the main day of Diwali festival, was celebrated on Saturday. Many people celebrate the occasion by bursting firecrackers.

"Five burn cases are reported on normal days, which went up to 25 on Diwali night, recording an increase of 400 per cent," Ahmedabad-based EMRI said in a statement.

The institute operates 108 free ambulance service across the state.

Apart from five burn cases in Ahmedabad, three were reported in Surat and two each in Bharuch, Rajkot, Narmada, among others, it said.

Ahmedabad city fire officials said that the fire outbreak cases reported on Diwali this year were fewer as compared to last year.

"From Saturday evening to Sunday afternoon, the fire service in the city got only 34 calls, while it had received 104 such calls last year," an official said.

In Surat also, 35 to 40 such calls were received by the fire brigade personnel.

Across the state, cases related to breathing problems also witnessed a rise on Diwali night, with 192 such cases, which is an increase of around 55 per cent from the normal-day count of 123, the EMRI said.

Cases of vehicular and non-vehicular trauma as well as fainting also saw an increased on Diwali day as compared to normal days, it said.

As many as 589 cases of vehicular trauma were reported, a jump of 75.8 per cent from 335 cases reported on normal days, it added.

Overall emergency cases also witnessed a surge of 24.4 per cent on Diwali compared to normal days, with Ahmedabad alone reporting 850 such cases, a rise of 53 per cent compared to 554 reported on normal days.

Other districts that reported over 50 per cent rise in emergency cases were Aravalli, Junagadh, and Valsad.

Mahisagar, Gandhinagar, Narmada and Navsari also witnessed a rise in 30-50 per cent of emergency cases on Diwali, it said.

Several cases of fire were reported in the state on Diwali night, though no casualty was reported.

A fire broke out in a house in Rajkot due to firecrackers, though the blaze was brought under control and no casualty was reported, officials said.

Cases of fire were also reported in Ahmedabad and Bharuch.

A fire erupted in a refrigerator company in Ahmedabad, and a tea stall and nearby food stalls in Bharuch, officials said.