A video of the incident went viral on Wednesday following which Ahmedabad rural police said appropriate action had already been taken. 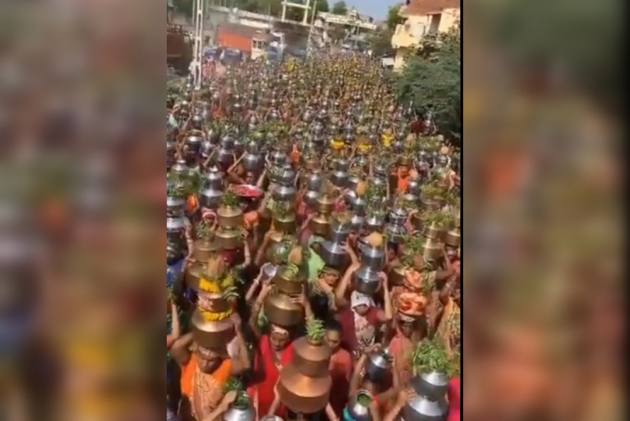 Flouting Covid-19 norms, a large number of women turned up at a religious event organized in a village in Gujarat's Ahmedabad district to "eradicate coronavirus", police said on Wednesday, adding 23 people, including the village head, have been arrested.

A video of the incident went viral on Wednesday following which Ahmedabad rural police said appropriate action had already been taken.

The incident which occurred in Navapura village in Sanand taluka on May 3, showed around 500 women carrying water pots on their heads while walking towards a temple. The video grab also shows some men taking these pots to the top of the temple and emptying them.

A police officer said villagers believed that coronavirus will just go away if water is poured on the Baliyadev temple.

#Ahmedabad: Amid #CoronaPandemic thousands throng during a religious event in Sanand.

"The incident took place on May 3 at Navapura village where women had gathered in large numbers carrying water pots. A police team rushed to the spot on the same day and arrested 23 villagers, including sarpanch Gafabhai Thakor, for organizing this event. Police had also seized the music system from the spot," said Deputy Superintendent of Police, Sanand Division, KT Kamariya.

He said all the accused have been booked for violating a police notification regarding public gatherings under section 188 of the Indian Penal Code and the Disaster Management Act and the Epidemic Diseases Act.

In view of the surge in COVID-19 cases, the Gujarat government had banned all kinds of public gatherings in the state.