For the second round of mock vaccination in Gujarat, four districts- Anand, Valsad, Dahod and Bhavnagar- were selected. 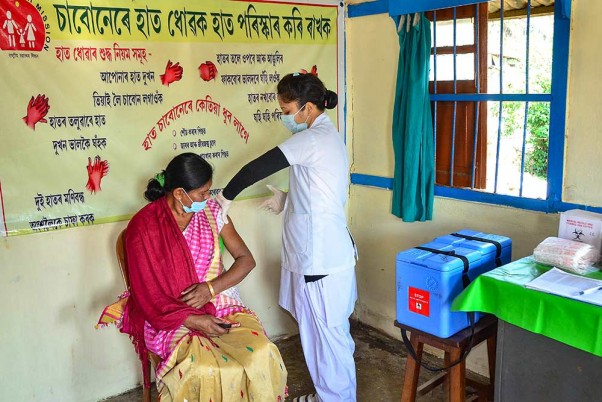 As many as 300 "beneficiaries" are undergoing dummy vaccination at various centres in four districts of Gujarat on Saturday as part of the second round of the dry run for the COVID-19 vaccine programme, health officials said.

The first round of the dry run was conducted at various centres in Gandhinagar and Rajkot districts, which concluded on Tuesday.

For the second round of mock vaccination, four districts- Anand, Valsad, Dahod and Bhavnagar- were selected.

Gujarat To Go For Free Vaccination As Far As Possible: Dy CM

"As many as 300 beneficiaries, all health workers, are being given dummy vaccines as part of the drill. This exercise is being held across 12 centres in the four districts selected for the purpose," an official said.

In Anand district, 25 beneficiaries were called for the dry run at one of the four centres created at a government school.

The beneficiaries arrived in batches and were first made to sit in a waiting room after proper sanitisation and social distancing as per the protocol. They were taken to the vaccination room where they were administered the dummy vaccine.

Thereafter, they were made to sit in an observation room for half an hour to complete the procedure, the official said.

"We called 25 beneficiaries, who were intimated beforehand on their mobile phones. As part of the vaccination process, we enter their details in the Co-Win application. After the process is completed, they get another SMS regarding the date and time for the second dose at the given centre," a health official at a school at Anand said.

In Dahod, a private hospital, a government school and two urban health centers have been selected for the dry run.

Explaining the procedure, a health official at Dahod said that a vaccinator verifies the documents of the beneficiaries at the entry gate before sending them to the waiting room.

In the waiting room, the vaccinator enters the details of the beneficiaries in the Co-WIN application before sending them to the vaccination room, where they are administered a mock vaccine and explained about various protocols.

From there, they are sent to the observation room for thirty minutes before leaving, the official said.

As part of the mock exercise, user IDs for beneficiaries are created through data feed in the Co-WIN application, using which the beneficiaries are selected and messages sent to them along with the location of the vaccination centre.

The cold chain system for vaccination is also monitored, under which everything done in the real vaccination drive is replicated.

The first round of the dry run was held on December 28-29 in Gandhinagar and Rajkot districts.

Gujarat Health Commissioner Jaiprakash Shivahare had told reporters on Friday that the state government has already trained 16,000 vaccinators and created a cold chain infrastructure to store one crore vaccine doses as part of its preparation in case the actual vaccination drive is announced.