Gupkar Alliance Likely To Meet In Srinagar On Tuesday

The alliance of various political parties was formed to strive for erstwhile state’s position before 5 August 2019. 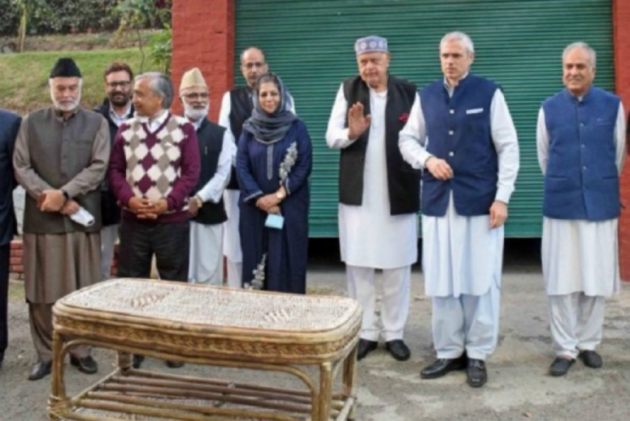 The People's Alliance for Gupkar Declaration (PAGD) is likely to meet in Srinagar on Tuesday to discuss the prevailing situation in Jammu and Kashmir.

The PAGD, an amalgam of various political parties in J-K including National Conference, Peoples Democratic Party and CPI(M ) was formed within an basic aim to strive for erstwhile state’s position before 5 August 2019, including restoration of the special status and statehood.

The amalgam headed by MP and NC president Dr Farooq Abdullah was formed by various political leaders of J-K, who were mostly jailed following the erstwhile state’s downgradation and subsequent bifurcation into the two Union Territories by Centre.

A leader said the meeting will take place at alliance chairman Dr Farooq Abdullah's residence at Gupkar here at 11 am.

"This meeting will be a different one from the earlier ones. This time it is not only the top leadership of the constituent parties which has been invited for consultations but the middle rung leadership as well," he said.

The leader said it has been left to the alliance parties to select the party leaders for the meeting.

"The participants will be from the length and breadth of the Valley and we expect around 150-200 leaders to take part in the meeting," he said.

The meeting has been called to discuss the prevailing situation in Jammu and Kashmir and "have wider consultations on various issues", he said.

"It (the meeting) will discuss the way forward and it is the first such attempt in the Kashmir valley by the alliance to get a broader perspective on the issues. We wanted to have this kind of consultation before but various factors like Covid prevented such a gathering," the leader added. (With PTI inputs)