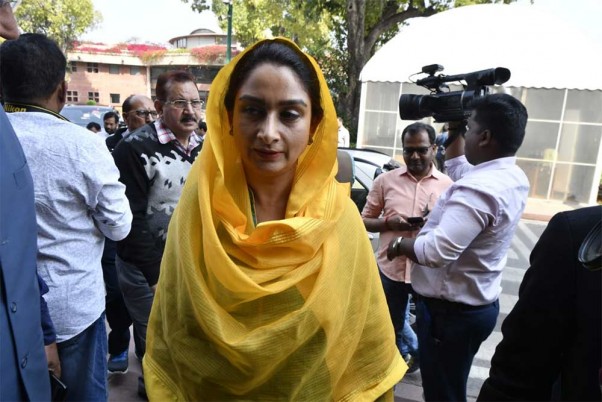 Shiromani Akali Dal's Harsimrat Kaur Badal submitted her resignation as Union minister to the PMO in protest against the three farm bills tabled by the Centre in Parliament.

In his speech during a discussion on two of the farm bills -- the Farmers Produce Trade and Commerce (Promotion and Facilitation) Bill and the Farmers (Empowerment and Protection) Agreement on Price Assurance and Farm Services Bill, Sukhbir Singh Badal said the proposed laws will "destroy" the 50 years of hard work done by successive Punjab governments to build the farm sector.

Also Read | Genesis Of Agitation: Why Farmers in Haryana And Punjab Are Protesting

He recalled Punjab's massive contribution in making India self-sufficient in food grain production as he vehemently opposed the bills.

"I announce that Harsimrat Kaur Badal will resign from the government," he said in Lok Sabha.

She is the only SAD representative in the Modi government. The Punjab party is the oldest BJP ally.

Haryana farmers are protesting against the Centre's three Farm ordinances, i.e The Farmers’ Produce Trade and Commerce (Promotion and Facilitation) Ordinance, the Essential Commodities (Amendment) Ordinance, and the Farmers (Empowerment and Protection) Agreement on Price Assurance and Farm Services Ordinance, 2020, which they claim are 'anti-farmer'.

The farmers' discontent is over uncertainty of payments, which as per the new ordinance have to be made within three days. But in reality, many of the small farmers in Madhya Pradesh for instance, are facing the problem of either not finding buyers or alternatively being pressurized to bring in larger quantities.

In Punjab and Haryana, which are among states from where the central agencies make most purchases for the food security including the public distribution system, there is an additional fear that farmers may miss out on getting an assured price or Minimum Support Price (MSP), which is often more than the market price particularly during times of surplus.

Given the good monsoon showers this year and expectations of a bumper crop, this cannot be discounted unless the government intervenes to ensure a fair price for farmers.