Have Come To Converse With Our Elected Representatives, No Question Of Closing Door For Talks: Farmer Unions 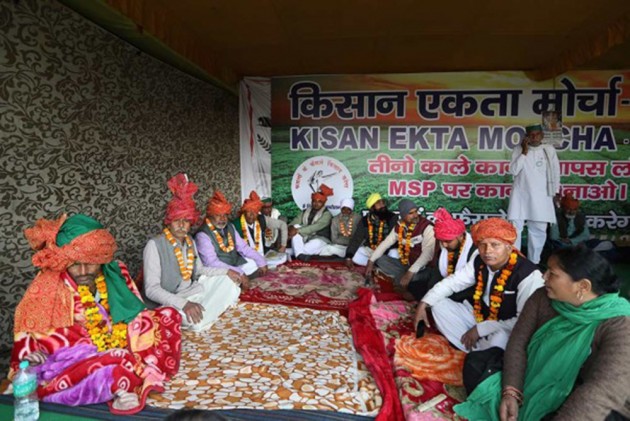 Despite numerous rounds of Centre-farmer talks failing to break the deadloch between the two sides, protesting farmers have made it clear that they are still open for talks with the government.

The Samyukta Kisan Morcha, an umbrella organisation consisting of numerous farm unions, that is currently spearheading the agitation against the Centre's three agriculture laws said on Saturday that there was no question of closing the door on talks with the government.
This comes amidst the protesting farm unions announcing their decision to intensify their stir at the Ghazipur border outside the national capital. Farmers observed a day-long fast on Saturday to mark Martyrs’ Day and vowed to continue with their stir.

The Samyukta Kisan Morcha’s statement comes after Prime Minister Narendra Modi during an all-party meeting on Saturday announced that his government's offer on farm laws made to the protesting farmers "still stands" and that the Centre was a "phone call away" for talks.
According to a release issued by Morcha leader Darshan Pal, "Farmers have come all the way to Delhi to converse with their elected government and therefore, there is no question of the farmer organisations closing the door on talks with the government."

Will Not Let Centre Bow Its Head In Shame But We Demand To Know Why Farm Laws Can’t Be Repealed: BKU

The last meeting between representatives of protesting farmers and the Centre was held on January 22.

The unions continue to seek repeal of the three farm laws and a legal guarantee of minimum support price (MSP) for crops, the Morcha statement said.

The Morcha also "condemned" alleged attempts of police to "weaken and destroy" the farmers movement. "It is clear that the police is encouraging various attacks on peaceful protesters. The continuous violence by police and BJP goons clearly shows the palpable fear within the government," Pal claimed in the statement.

Meanwhile, in Bihar, Sadbhavana Diwas was marked with long human chains in different districts of the state including Muzaffarpur and Nalanda, it added.

Thousands of farmers have been protesting at Delhi's borders demanding the rollback of the Farmers' Produce Trade and Commerce (Promotion and Facilitation) Act, 2020, the Farmers (Empowerment and Protection) Agreement on Price Assurance and Farm Services Act, 2020 and the Essential Commodities (Amendment) Act, 2020. The protest took a violent turn during the farmers' tractor rally on January 26.

Enacted in September 2020, the central government has presented these laws as major farm reforms aimed at increasing farmers' income, but the protesting farmers have raised concerns that these legislations would weaken the minimum support price (MSP) and "mandi" (wholesale market) systems and leave them at the mercy of big corporations.

The government has maintained that these apprehensions are misplaced and ruled out a repeal of the laws.