The current state cabinet has only 14 members, including the CM, less than half of the sanctioned strength. 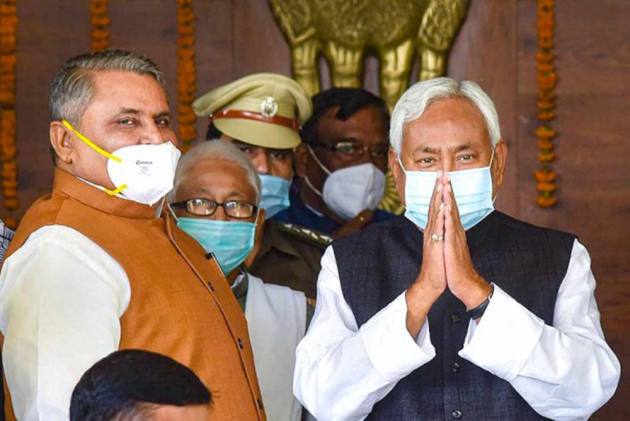 Expansion of the newly formed cabinet in Bihar will take place after consultation with the BJP, Chief Minister Nitish Kumar said on Tuesday.

Nitish made the statement in response to queries regarding speculations about a tussle between his JD(U) and the BJP, hampering cabinet expansion.

The current state cabinet has 14 members, including the CM, less than half of the sanctioned strength. As per the rule, a maximum of 36 ministers, including the chief minister, can be appointed to the 243-member Bihar Assembly.

"At present we are busy with moving forward on our blueprint for the next five years. A cabinet meeting is scheduled later in the day for this purpose. When the BJP proposes expansion of the cabinet, we will think over it. So far no proposal has been received", Nitish told reporters.

Speculations were rife that the cabinet expansion was deferred as the JD(U) was insistent on having a number of berths equal to that of the BJP which at present has seven ministers, as against only four from the chief ministers party. Two BJP members Tar Kishor Prasad and Renu Devi have been designated as deputy chief ministers.

One of the JD(U) ministers, Mewa Lal Chaudhary, had to resign within hours of taking charge as a massive controversy had erupted over his being named in a case relating to irregular appointments at an agriculture university of which he was then the Vice Chancellor.

While the BJP is said to be of the view that it deserved a greater share of the pie on account of its superior tally in the Assembly, the JD(U) holds that it suffered in the Assembly elections because of Chirag Paswan’s politics of brinkmanship whom the saffron party failed to rein in despite its clout.

In the Assembly polls, the BJP returned with a tally of 74 while the JD(U) won only 43 seats.

The JD(U) is also said to have underscored that it had contested as many seats as the BJP in the Lok Sabha polls last year, despite then having a strength in the Assembly that was superior to the latter. The JD(U), the BJP and the LJP had fought the 2019 general elections together for the 40 Lok Sabha seats in Bihar and returned with respective tallies, of 16, 17 and six.

While the LJP has pulled out of the NDA in the state, insisting that it was still a constituent at the Centre, two small parties--former chief minister Jitan Ram Manjhis Hindustani Awam Mprcha (HAM) and Bollywood set designer- turned- politician Mukesh Sahnis Vikassheel Insaan Party (VIP) joined the coalition ahead of the Assembly elections.

Son of Manjhi, whose party won seats set aside by the JD (U) from its own quota of 122 seats, and Sahni, who was accommodated by the BJP after he snapped ties with the RJD-led Grand Alliance, have been accommodated into the state cabinet. Both the parties had won four seats each in the October- November state elections.