Stating that he had not indulged in any anti-party activities, Jena said he could not fit as a member of the Congress because he was not "accumulating properties" from the loot of mines. 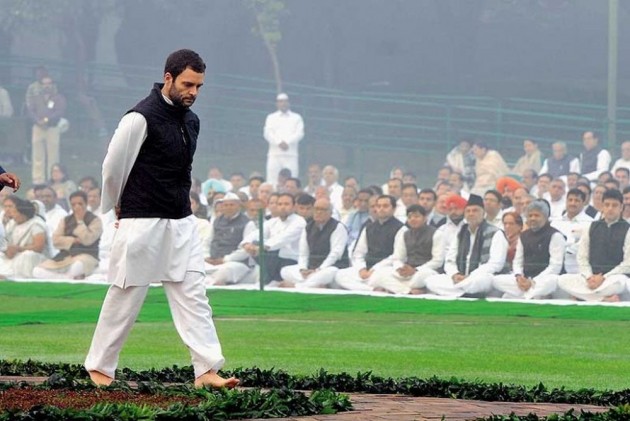 Just a day after he was expelled from the Congress party, former Union minister Srikant Jena on Sunday said he would expose AICC president Rahul Gandhi to such an extent that he would "not show his face in public" again and alleged that the party president is siding with the "mining mafia" in the state.

Jena, along with former Koraput MLA Krushna Chandra Sagaria, was expelled from the primary membership of the Congress for anti-party activities by the Odisha unit of the party, following recommendations from the All India Congress Committee (AICC).

"I understand that Rahul Gandhi is visiting Odisha on January 25. I will expose him on that day so that he will not be able show his face in public," Jena told a press conference in Bhubaneswar.

He, however, did not divulge the details of his proposed "maha-khulasa" (disclosure) against the Congress chief.

Freedom fighter Gopabandhu Dash is referred to as "Odisha's Gandhi", who earned the sobriquet "Utkalmani" (jewel of Utkal or Odisha) for his tremendous contribution as a social worker, reformer, political activist, journalist, poet and essayist.

Jena alleged that Gandhi had also decided that the governance of Odisha should remain with the Patnaik family, for which he had announced a "grand alliance" with Biju Janata Dal (BJD) president Naveen Patnaik.

Stating that he had not indulged in any anti-party activities, Jena said he could not fit as a member of the Congress because he was not "accumulating properties" from the loot of mines.

In a letter to Gandhi on December 9, 2018, Jena had said: "I can understand why our PCC president, Niranjan Patnaik, is strongly opposed to illegal mining as an issue given that his family is directly involved in it. They have been charged the highest penalties for illegal mining, amounting to over Rs 2,000 crore last year.

"On top of this, Niranjan Patnaik has filed an affidavit in the Orissa High Court (in a case dating back to 1985) that he used to give bribes to a mining official for his mining business."

"From now on, I will wage my relentless fight against the unholy nexus between Rahul Gandhi and (Chief Minister) Naveen Patnaik in Odisha," he said.

Jena added that he would expose the complicity of the BJD government in the state with the mining mafia.

Replying to Jena's allegations, Niranjan Patnaik said, "Those indulging in indiscipline have no place in the Congress."

Slamming the state Congress chief, Jena said he (Niranjan) was a habitual bribe-giver and had also received a stricture from the Orissa High Court.

"Despite being aware of this, Rahul Gandhi entrusted the party's state leadership with him and created an opportunity for the Congress for an unholy nexus with the mining mafia in Odisha," he added.

Meanwhile, state Bharatiya Janata Party (BJP) vice-president Samir Mohanty said Jena's ouster from the Congress proved that the party was being run by the mining mafia.

BJD spokesperson PK Deb, however, rejected Jena's allegation, saying, "There is no consistency in Jena's statements as he had earlier claimed that the BJD was the 'B' team of the BJP."